ALL IN A DAY’S HIKE, A THOUSAND MILES FROM ANYWHERE 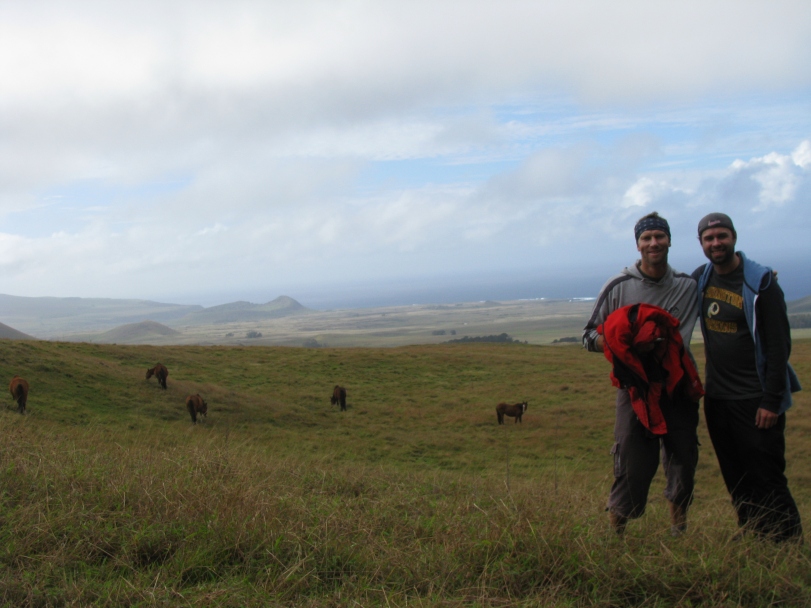 So as I hike up these muddy trails, I’m swapping stories about my favorite hard rock and metal bands growing up with a guy who I didn’t know a few days ago. This Austrian-born 40-something, has just recounted a story about how he discovered everyone’s favorite “Du Hast-ers”, Rammstein, before they got big. Oh yeah, “Herzeleid,” I said, recounting the title of their first album. “Yes, you know?!?,” he retorted with some surprise. “Of course!,” I said. “That was high school for me.”

His friend had popped in Herzeleid, Rammstein’s debut album, and they both count themselves as one of the first of a growing legion of fans of the German pyro-metal band. “The first song I heard was the first song on the album,” he said. “Wollt ihr das Bett in flammen sehen,” we said in unison, laughing. Loosely translated it means something along the lines of “Would you like to see the bed in flames”, as if any hard-rocking headbanger ever really cares. But that’s not the point. Here we were, two former strangers that just met three days prior hiking up Ma’unga Terevaka, the highest point of Easter Island, surrounded by nothing but the vast oceans, clouds, wild horses and slowly increasing wind as we approach the summit. Two people, previously thousands of miles apart, recounting innocent memories of youthful music interests with the closest ears that of the moai, the mystical statues of this remote and barren island. 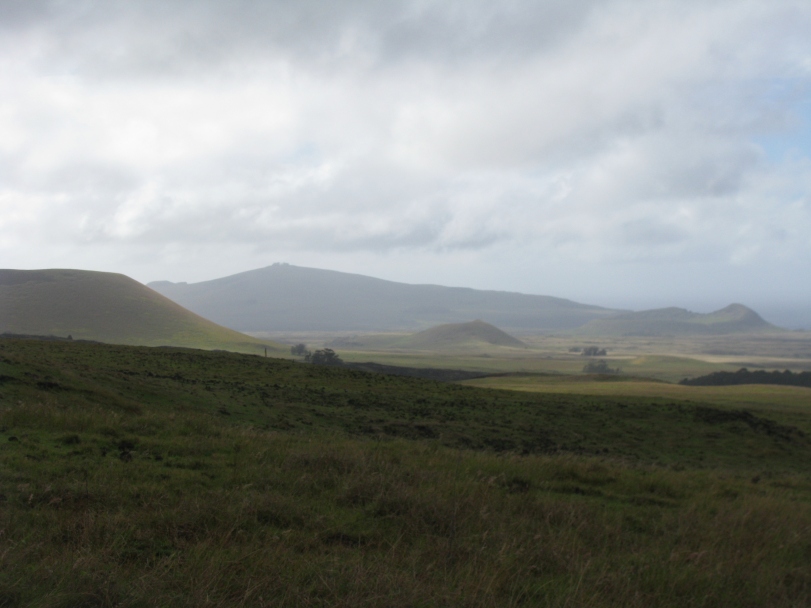 The Rano Raraku site (where the moai were carved) is off in the distance, to the right of the shot. In the far center is Poike, one of the three main volcanoes of the island.

Jose (Josef, but it’s easier to go with South American nicknames in these parts) and I have shared at least a hundred different music and travel stories as we hike up Terevaka. I was on my first trip down South (as in south of the equator). Jose’s travel log features much of South America (and nearly every continent sans Antarctica). Needless to say, Jose lives the life, balancing family and travel and fighting back age while donning a Death by Stereo beanie. Jose is in his early 40’s but might as well be my age. He’s got the grit of a 40-year old with the disposition of someone much younger. If you think I’m gushing, I’ll admit, I admire someone who has succeeded in being happy in life and living it the way they want to. Leave it to a place like Easter Island to find that there are such people left on Earth. Tack on ten years, heck, twenty, maybe more, and I hope I’m still living an ageless life, content in my world and discovering new places and continuing to understand more about the world and myself. I further realize how lucky I am to have someone in my life that appreciates and shares my love for travel as well. Life’s greatest memories aren’t worth sharing alone, which is why I’m glad my newest friend, Jose, is here to at least prove I made it to the top of Easter Island and survived what could easily have been 80+ mph winds… 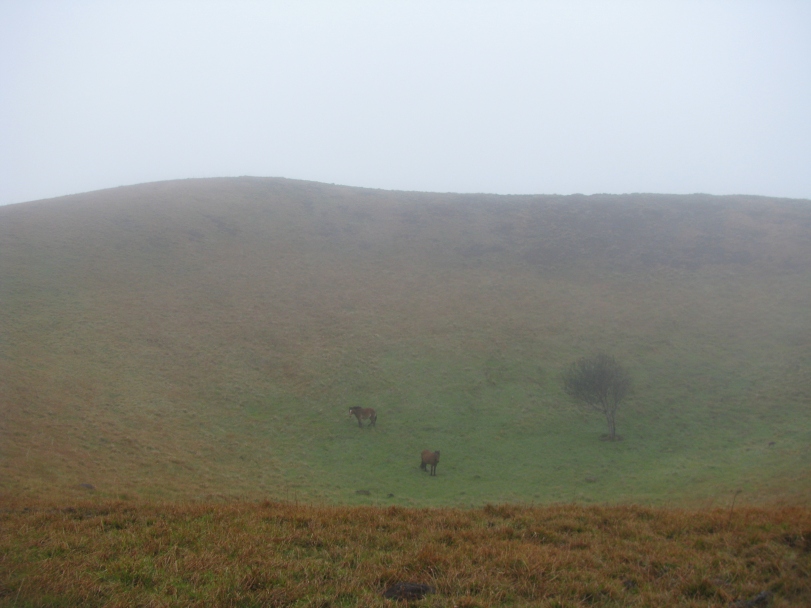 Yes, the top of Terevaka, with a long shot view of the town of Hanga Roa and the eastern coast of Easter Island, is a mere 1,665 feet up. That said, it’s the highest point of land this side of the Chilean mainland, and the Chilean mainland is a five-hour flight away. Somehow, these three volcanoes of Easter Island (Terevaka being one of them) did enough to poke a little land out of the ocean where no land existed. So if I’m picking a 1,665 peak to climb, it’s Terevaka, with Austria’s version of the most interesting man in the world. Come to think of it, there weren’t any Dos Equis at the Dominican (a local bar) but they had plenty of Mahina, a cool brew native to the island. 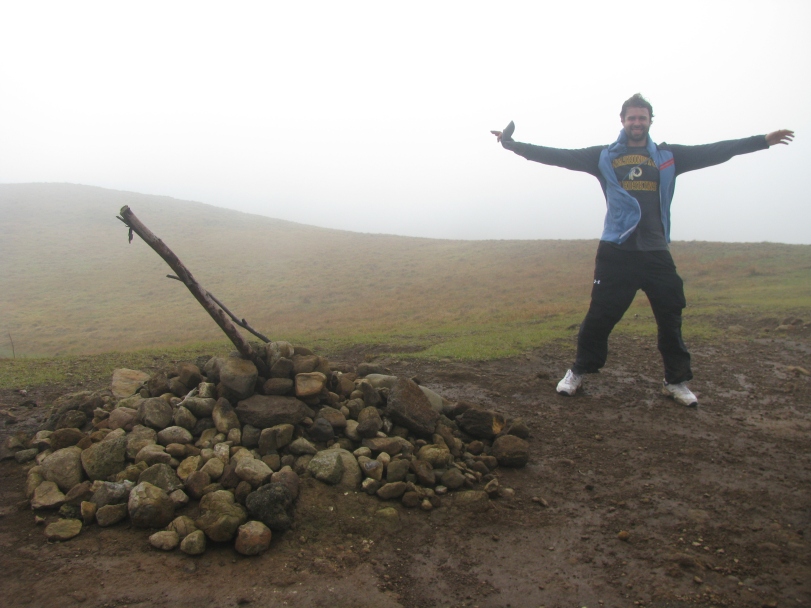 The best way to get a faux hawk on the island – the pinnacle of Terevaka.

Our conversation was cut short somewhere around the 90’s grunge movement or the Mutiny on the Bounty (Pitcairn Island is Easter Island’s closest neighbor), I can’t remember, because on the top of Terevaka you literally can’t hear yourself speak. Not only have you reached the clouds, who haven’t had time to get out-of-the-way of this little speck in the ocean, you’re dealing with deafening winds from all directions. The wind is your “trust friend”, you can let yourself lean back and it’s got your back.

Earaches aside, it was time to ascend. Easter Island is full of treats, and the moai of Ahu Akivi (the furthest inland of  the statues on the island) patiently awaited our arrival.

More pictures of our climb below… 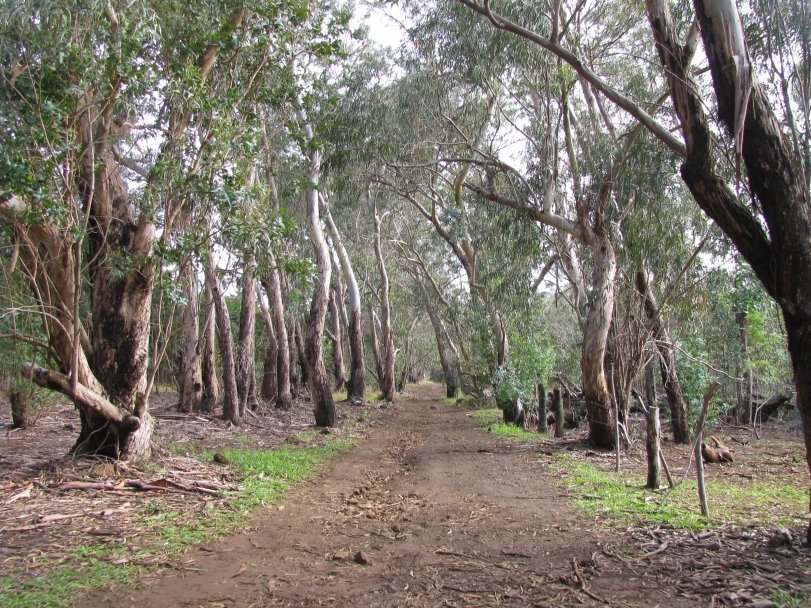 The start of the trail up to Terevaka. Easter Island even has mystical trees! This shot is one of my favorites from the trip. 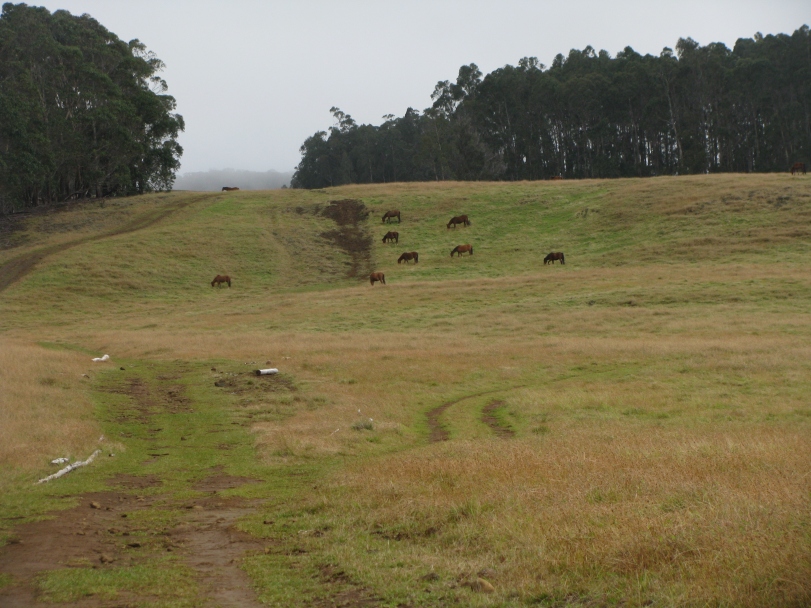 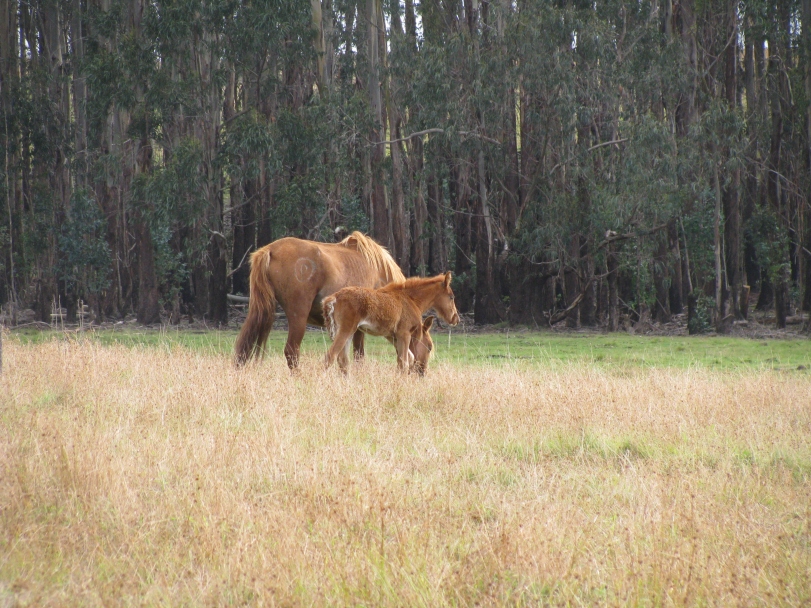 A mother and kin 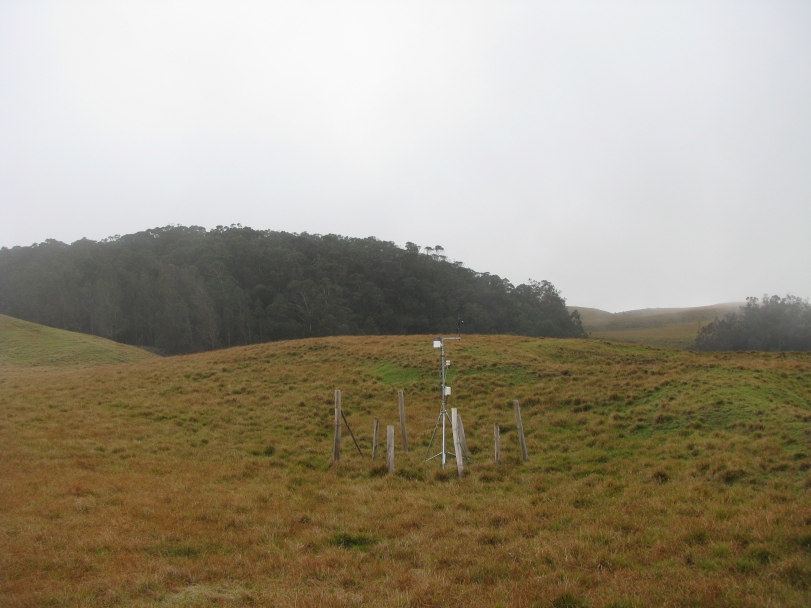 A weather station, a couple hundred feet from the top 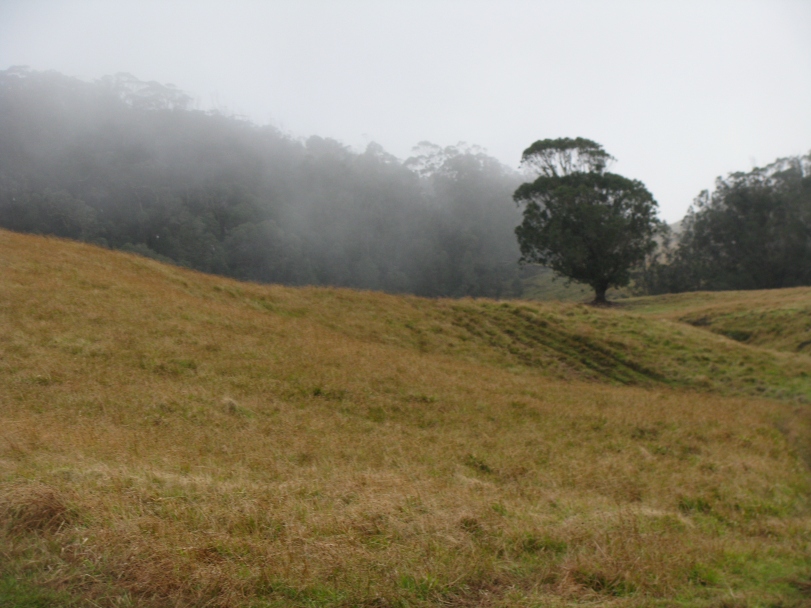 Clouds rolling in over the highest parts of Easter Island 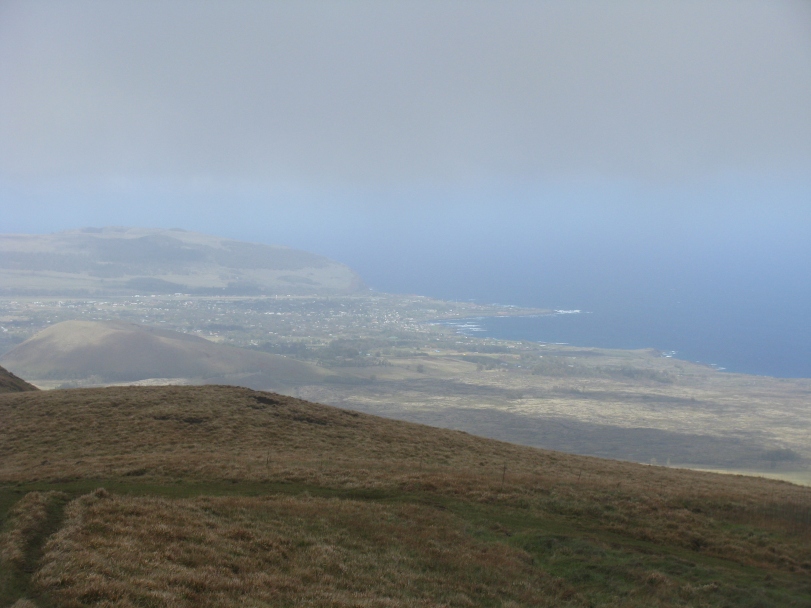 A distant view of Hanga Roa 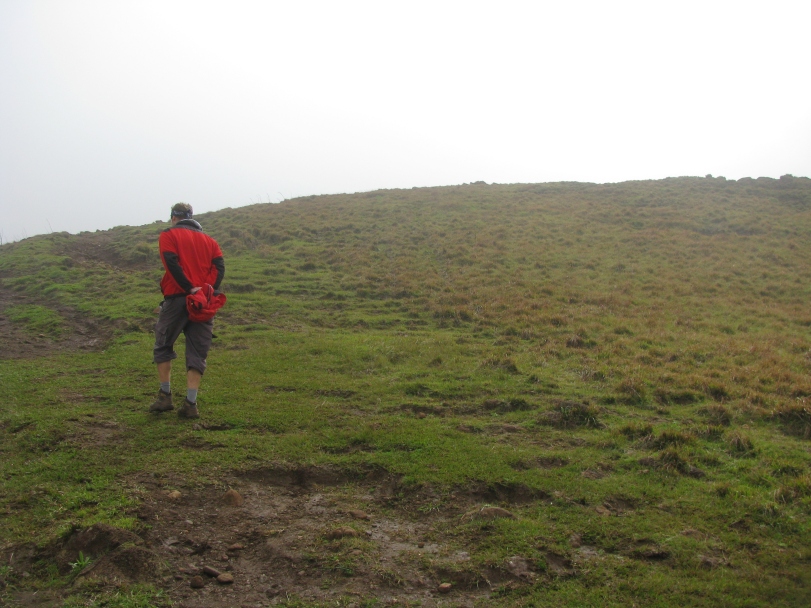 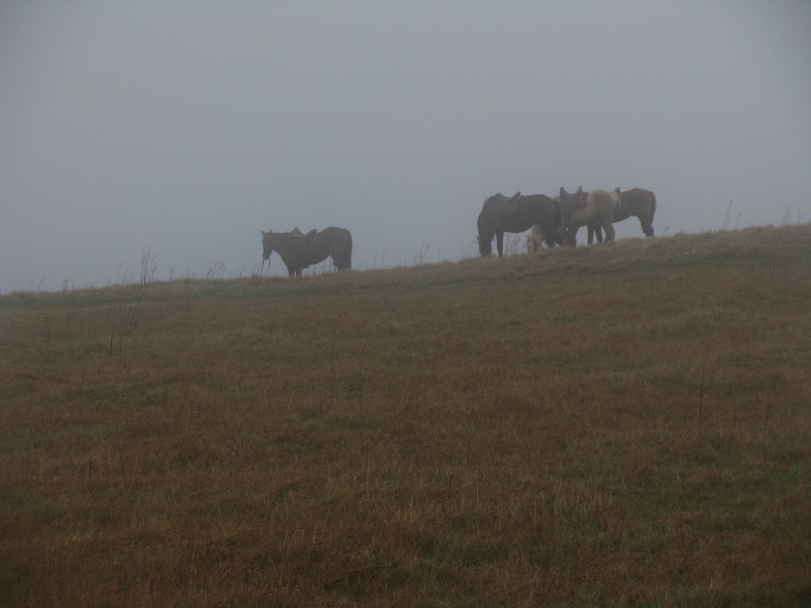 More horses grazing against the skyline, seemingly impervious to the wind 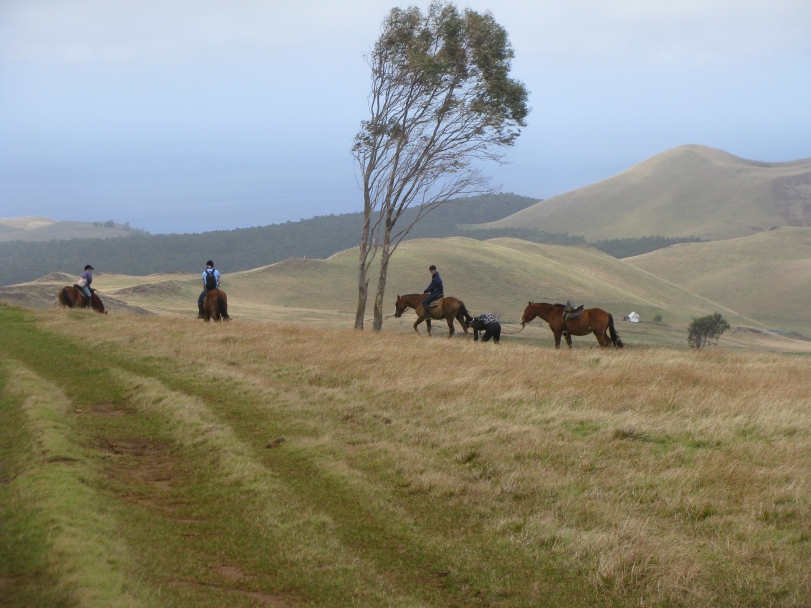 We spotted a group of riders on our ascent 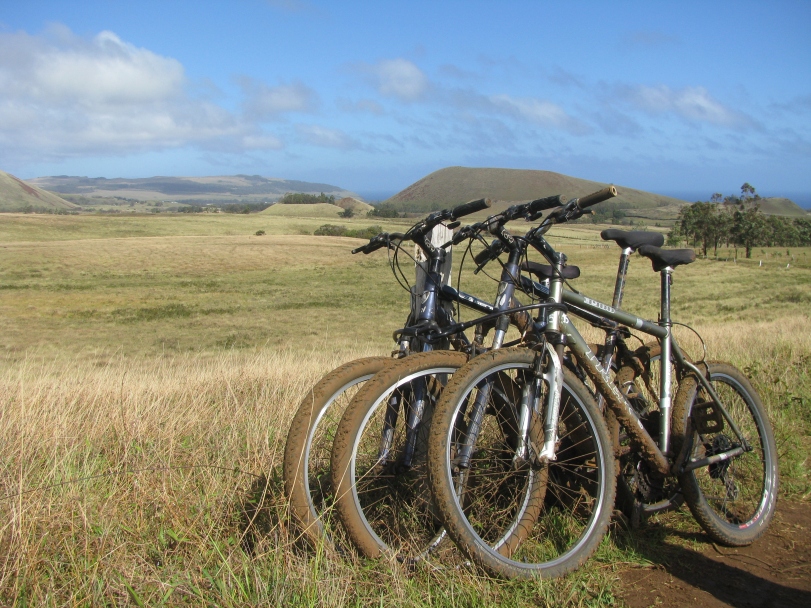 I could say I shot this photo in Montana and no one would know the difference. Where else could you get a picture like this in the Polynesian triangle? I mean seriously…