TALE OF THE TAPE: EASTER ISLAND MOAI VS. STONEHENGE 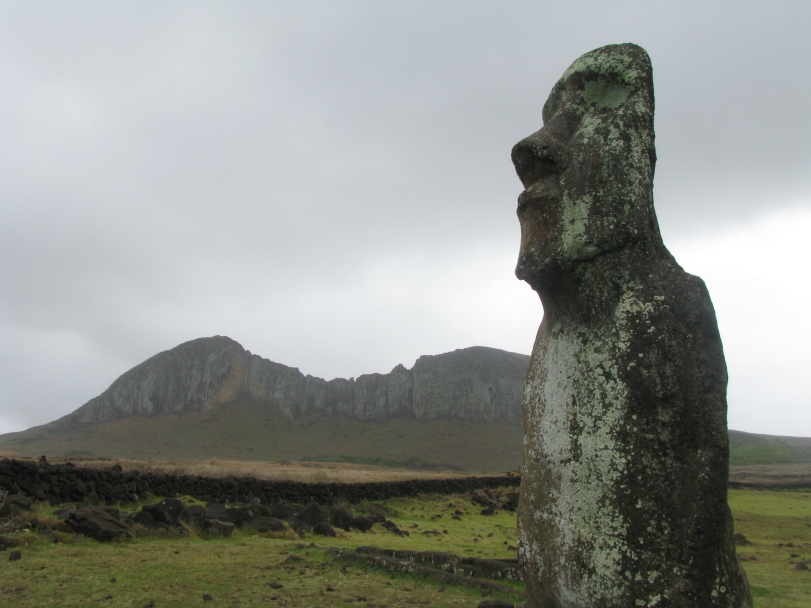 I’m sure I’m not the first person to ever do this, but outside of U.K. and/or Easter Island locals who traveled to-and-fro their respective places, I managed to visit Stonehenge and Easter Island within 16 days of each other. Arguably the two most iconic (and mysterious) stone monuments in the world (What else? Humor me? The Rai coins of Yap?)

So when it comes to stone hauling bragging rights, who wins the tale of the tape between these two popular tourist spots? Well, I broke them down into eleven different categories, rating each category on a five-point scale (5 best, 1 worst). Let’s do this! 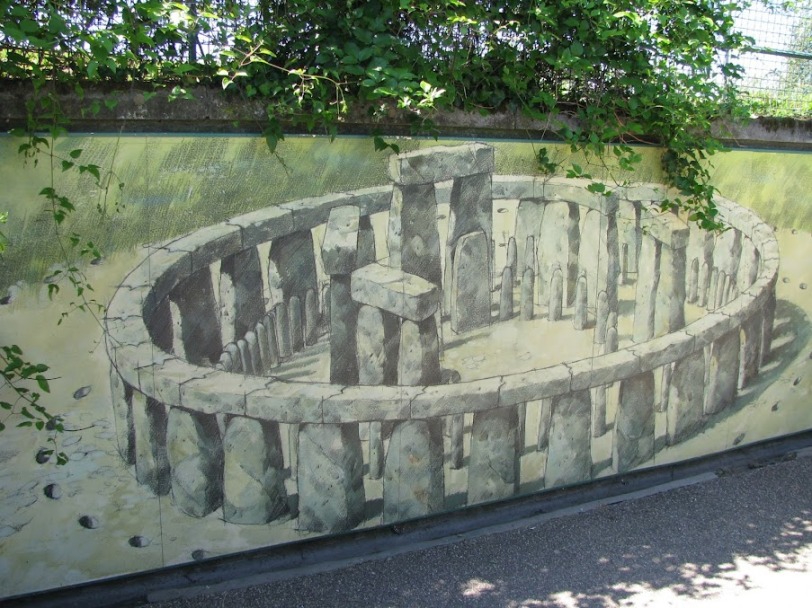 A more complete Stonehenge, back in the day…

Nobody truly knows the histories behind either – but it’s arguable the Easter Island’s is more hotly debated. Let’s just say the moai of Easter Island are like dinosaurs to Stonehenge’s Tasmanian tiger. Both are cool, but nearly everyone thinks dinos are cool or at least knows of them, while the likely extinct tiger demands a bit more of an  learned appreciation in the field. So we’ll go with what is most known about both: Stonehenge was a way of telling time and may have been a place of pagan rituals (on top of being a burial mound before it was ever a bunch of big rocks). Easter Island moai were likely representations of deceased members of the Rapa Nui, meant for either worship or protection. Easter Island Moai 5, Stonehenge 4. 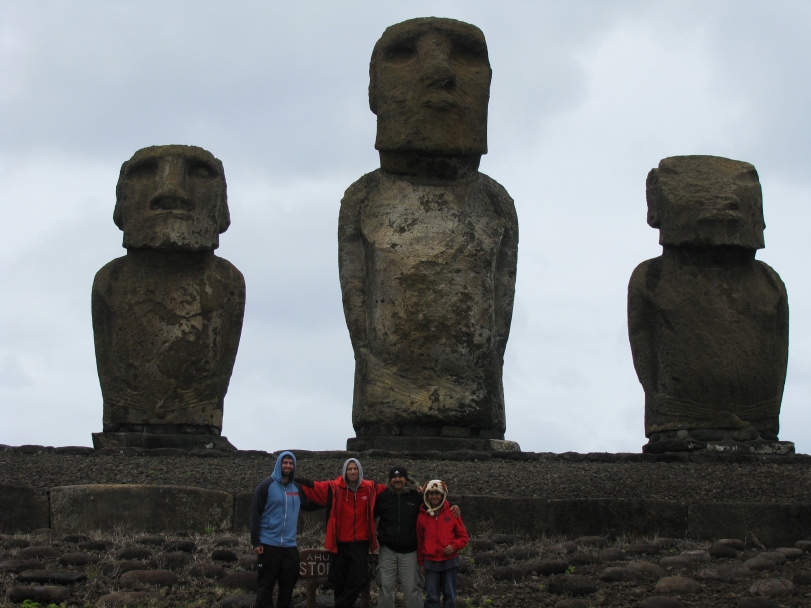 How’d you like one of these statues in your yard?

The larger Stonehenge rocks outweigh most of the moai on Easter Island. The fact is, nobody really knows how these stones were moved in a time  where you couldn’t just toss these on the back of a flatbed and motor over to the site. Likely large groups of people (and a little creativity) made it work, but whatever happened has kept the theorists on their toes. It’s been discovered that some of the Easter Island moai are buried far in the ground, making them much larger than they appear. That and they were carved out of a volcano. It’s still a close call. Easter Island Moai 9, Stonehenge 7.

A relatively tourist-free shot, except for the goofy guy there in front

You can’t get too close to Stonehenge (and in time you might not be able to get on the site at all, at least that’s a rumor I heard). Despite this (and the endless flow of tourists) you can still get some pretty nice shots of yourself with the monument in the background. The moai are protected as well, though you can get much closer (close enough to touch in many instances, but don’t be doing that!) and won’t usually have to deal with quite as many people (though you might in the high tourist season of January through March, especially at the main sites). That and the moai represent many hundreds of great photo ops around the island. Easy win here. Easter Island Moai 14, Stonehenge 9. 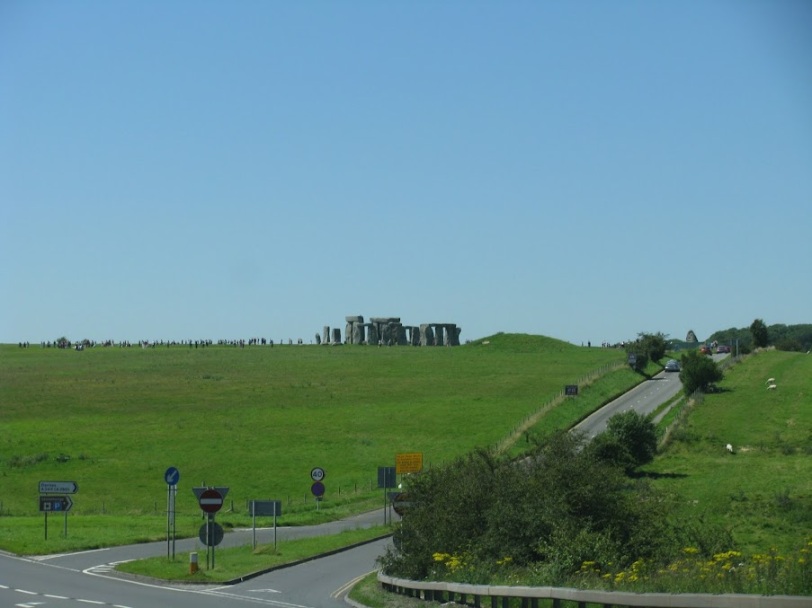 See all the tiny, little people?

Stonehenge nets a strong showing. While Easter Island’s roads are drivable (in some spots, barely), the view of Stonehenge as you drive in from the East is breathtaking (for all of five seconds until you see the throngs of tourists blocking the view). That said, Easter Island throws in a very nice roadside vantage point of the moai as you drive into Rano Raraku. Easter Island Moai 19, Stonehenge 14. 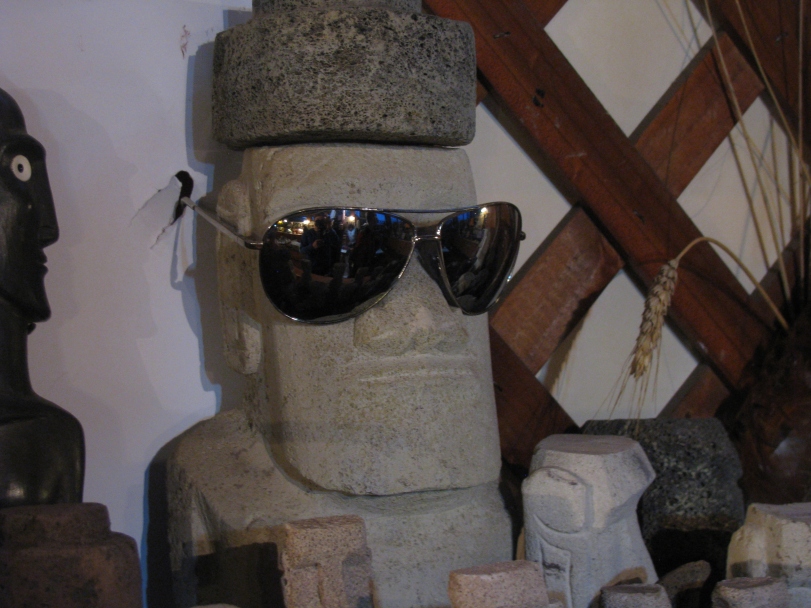 Does it come with the cop shades?

Easter Island on a whole can be considered a tourist trap dependent on your perspective. 90% of that is the surplus of crafts and overpriced moai carvings. Ignore that and there really isn’t a trap to be found, sans the $50 park entrance fee (for good reason) and the cost of using the toilet at Rano Raraku (500 pesos I believe, about one dollar). Stonehenge has your typical expensive gift shop wares as well, a long with somewhat pricey (but decent) food concessions. Thing is, Stonehenge FEELS more like a typical tourist destination when you see the busloads of people unleash upon your viewing experiences. Easter Island Moai 22, Stonehenge 16.

Welcome to End of the Earth-ville, Easter Island. You came here for shots like this…

This is a tough one to score, because it depends on your viewpoint. Do you relish getting to the more challenging locales or prefer easy travel (then you’re not a real traveler!). Either way, it’s still hard to judge this one. Easter Island is actually pretty easy to get to, if you can handle a very long travel day (or days) on each end of the voyage. As for Stonehenge, you have to fly into London and either get on a tour bus or hire a car for the journey (and for us right-hand road drivers, that can be a challenge at first). Of course, Easter Island is still pretty frickin’ remote, no matter how you score it. Easter Island Moai 25, Stonehenge 18.

The moai do all kinds of neat tricks

Yes, I basically threw this in to pad the Moai’s score. The moai will stare into your soul while the rocks at Stonehenge are rather soul-less (though there are some lost souls buried underneath). Easter Island Moai 30, Stonehenge 19.

Do you collect National Parks and World Heritage Sites? Do you collect cool passport stamps? The Moai have you covered with all three. Stonehenge will net you one and maybe two if you’re really excited about that U.K. stamp (no offense, but an Isla de Pascua stamp trumps most places). Easter Island Moai 35, Stonehenge 21. 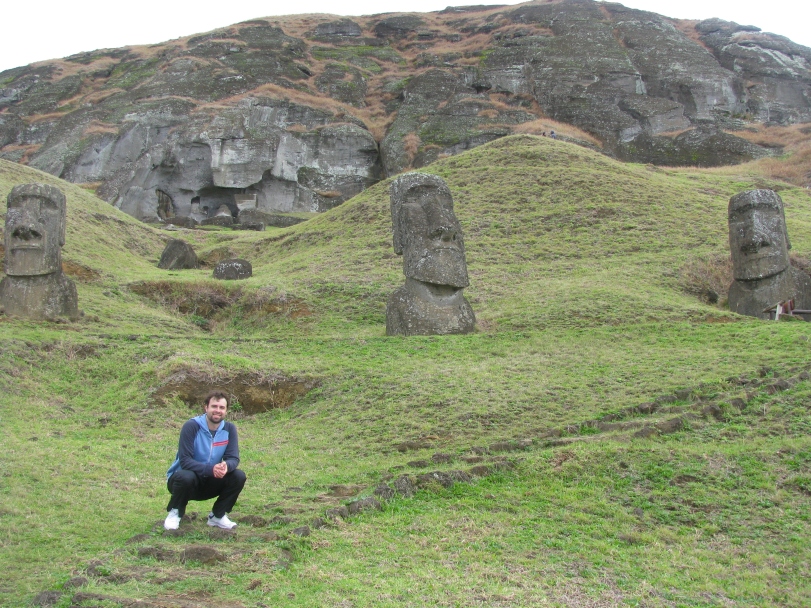 Look at me! Look at the moai! Cool huh? huh?

Yes, I’ll admit it. Travelers like to boast and I’m not going to say I don’t (although I try to be subtle). A picture is worth a thousand words and some of them could be “Look at me, I’m in front of some moai and you’re not”. I won’t go that far as getting to Easter Island kind of speaks for itself in those terms, as not as many common travelers actually go out of their way to get down there. That said, Stonehenge got some oohs and ahs from some people I talked to after the trip, so this score is closer than you think. Easter Island Moai 40, Stonehenge 25.

The walk up to Stonehenge, tourists included

You’ll leave Easter Island with far more long lasting and impacting memories than Stonehenge. It’s not just the moai, but the island as a whole and it’s remote nature. Stonehenge, in a vacuum, would have a similar impact if you could sit in the field and take it all in without the roar of engines and general commotion of tourists. Easter Island Moai 45, Stonehenge 27. 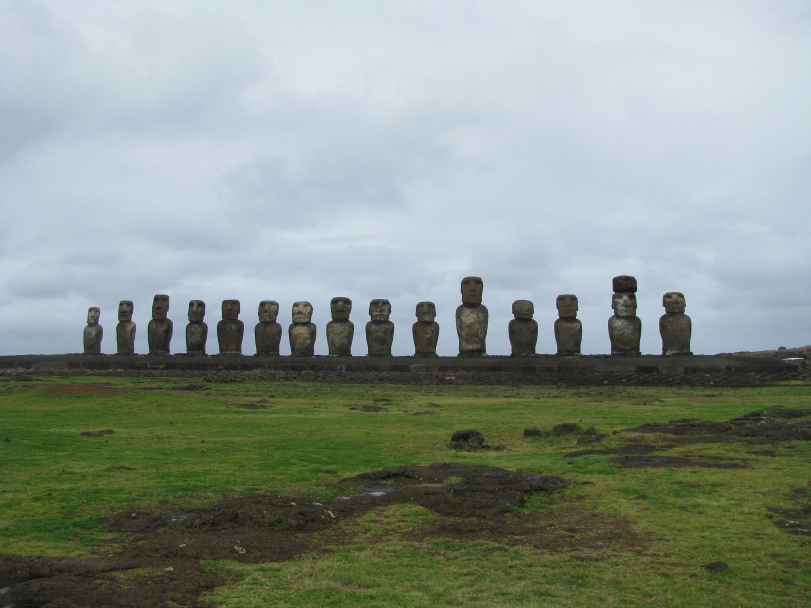 I could go back for this…

As a traveler you can never rule out re-visiting a place. I wasn’t sure I’d ever go through Knoxville, Tennessee anytime soon after visiting for a football game nearly a year ago today. I drove through again last February (and sampled some fine pizza at Hard Knox Pizzeria). Easter Island is a bit further than Knoxville (at least for me), but I could consider it in the future (especially if any currently unborn kids want to go – heck yes then, what a fantastic excuse). I could see myself revisiting Stonehenge as well for a similar future family reason and not because of Stonehenge, but more because I’d be back in the U.K. and it’d just happen to be part of an itinerary. Easter Island Moai 49. Stonehenge 29.

If this match was handicapped, the easy betting money would all be on the moai. You probably knew that from the start. People go to Easter Island for the moai. People don’t go to U.K. for Stonehenge. It may be on their plan to see, but it doesn’t make for a true extended stay. It could theoretically be broken into a couple long days if one wants to see every nook-and-cranny (don’t forget Woodhenge and Avebury), but that’s for the absolute diehards. The moai kicked some butt in this competition, but it’s not really a competition. If you can see both, do it! Just don’t beat my record of 16 days – I’m keeping that for myself!

8 thoughts on “TALE OF THE TAPE: EASTER ISLAND MOAI VS. STONEHENGE”