So (SURPRISE!) I went to Easter Island this past week relatively unannounced (a practice I like to do). Unfortunately, I had hoped to do a live blog or two from the remote Polynesian island but, alas, internet on Easter Island has not caught up to the rest of us…yet.

Before I dive headfirst into the trip, I wanted to create a handy little list of things that you may not know (or think you knew, but didn’t) about Easter Island. This includes things that I certainly did not expect to see or experience down there (or en route). Now, enjoy the list while I shake off my jet lag (and jet leg…my knees are still hurting!). 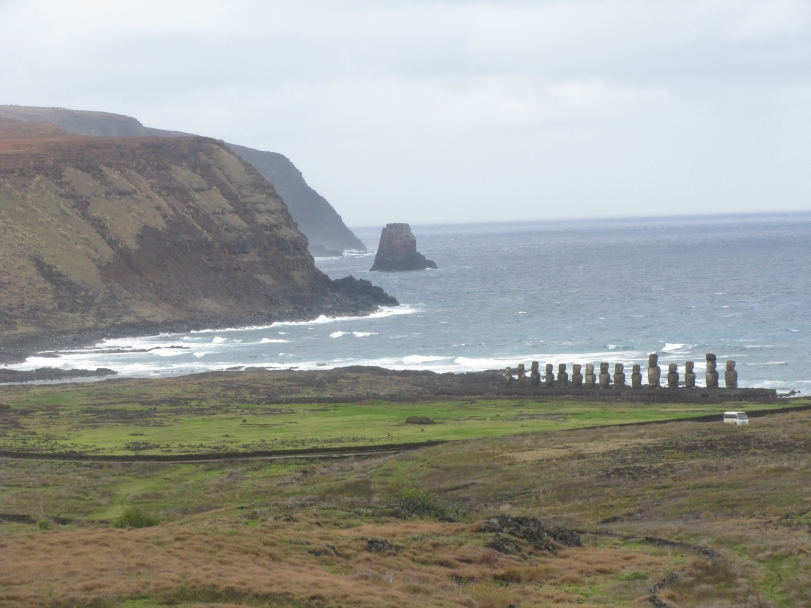 Ahu Tongariki – the largest restored display of moai on the island

– The island is bigger than you think. I visited Block Island (Rhode Island) earlier this year and was astounded to how walkable it was. I initially thought Easter Island would be similarly pedestrian-friendly. Not so much. Unless you are quite the hiker, I wouldn’t use your feet as the main mode of transportation. Yes, Easter Island is small – but not small enough to shun wheeled-transport options. That said, there are fantastic opportunities for walking and hiking all around the island.

The food is impressive – but not cheap. You won’t break the bank if you set a 30,000 peso/day budget (which is still possible if you share a rental car).

– It’s not cheap… I spent five days on the island and needed every penny of the 150,000 Chilean pesos I had (in fact my last meal I paid for was in USD). After paying my National Park entrance fee at the airport ($50 USD and they don’t have change, I had to ask someone to break a $20 for me) I used the airport’s ATM to withdraw pesos. Decent meals tend to cost around $20 USD a plate and don’t forget drinks, which at restaurants are usually around 1,500 ($3 USD) for a can of soda. 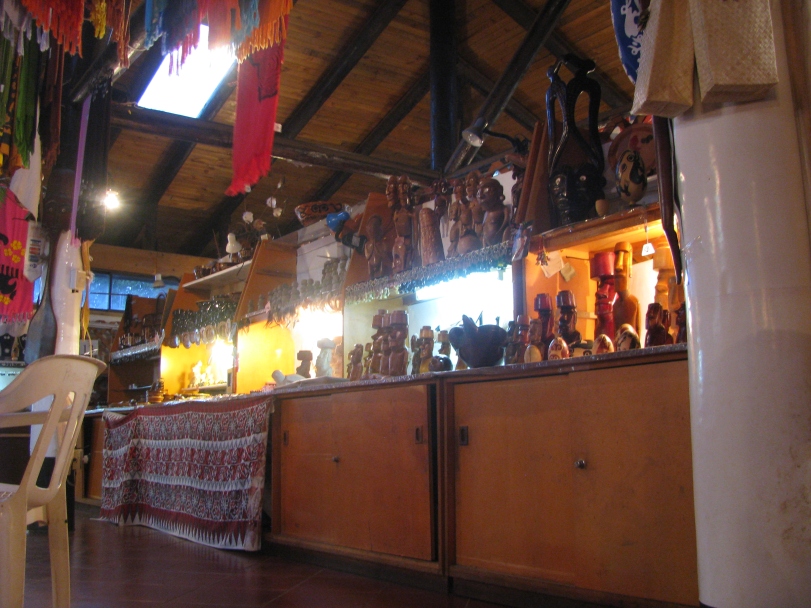 – …and the whole island is a business. It seems almost anyone is an artisan or running a shop with connections to artisans. Everyone knows a driver, or can drive you places themselves. Heck, even the restaurants will let you buy the decor for the right price (one offered to sell us some carved moai statues that sat by the outdoor deck). Just be on the lookout. We had one shop owner tip us off that “because of [our] faces” they could easily tell one was not local (or anywhere near local, as in Chile or South America) and we’d have trouble getting a good price. Looking for a moai to take home? Be prepared to know what’s a real Easter Island rock and what’s not (and worse, what’s just plaster – at least if you’re planning to pay for a high dollar moai). 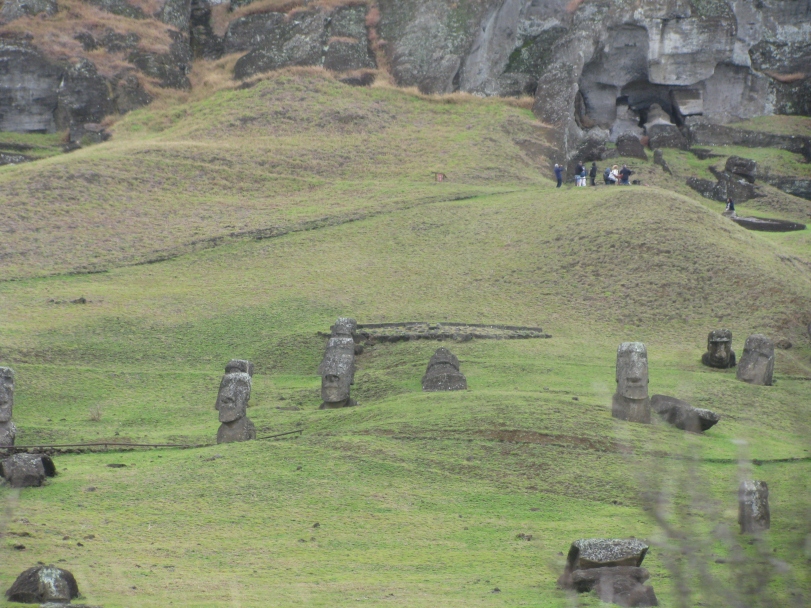 Rano Raraku, the moai quarry and site of nearly half of the island’s discovered moai.

– Moai aren’t everywhere – but spread out and concentrated in certain areas. One thing that surprises some is the fact that the famous Easter Island statues are not just dotted everywhere. In fact the northern part of the island is pretty much devoid of them. About half of the island’s statues are situated in and around Rano Raraku, which is a volcanic crater near the Southeast corner. There are a few in and near the town of Hanga Roa as well. Also, all moai standing on ceremonial pedestals are part of the restoration work of the last 40 years to revive the original Rapa Nui foundations of Easter Island for locals and tourists alike.

A cloudy and drizzly day at the Anakena beach is still a day on a beach on freaking Easter Island! I’ll take it.

– This is a paradise, but don’t expect your typical island getaway. Easter Island is very rugged in nature. Inland, its appearance can mimic almost anywhere (there were times I could pretend I was wandering hills in Central Montana, save for the coastline views). The town of Hanga Roa is not a typical Polynesian beach town, but is its own cozy, rag-tag world of shops, eating holes, small homes and loose, albeit domesticated, dogs. It has its own charm, and you’ll likely miss all its eccentricities when you leave. Yes, you’re here for the moai and the history, but you’ll be spending more time than you think in Hanga Roa. Oh, and there is a beach, but it’s only open during “summer” (which is January to March down there). It’s a beautiful beach too, and you may find yourself swimming in its relatively warm waters anyway if you visit in the offseason.

Long live LAN! It’s one of the best flying experiences you’ll ever have!

– Your plane ride will be fantastic. You will be flying LAN Airlines out of Chile, Peru or maybe Papeete, Tahiti (I recommend Peru for the fantastic and modern Lima Airport and lack of any excess fees you’d face in Santiago). LAN, right now, is your only option to fly into Easter Island and after you’ve sifted through 800+ full CD albums, watched a couple movies or browsed through complete television seasons on your personal touchscreen media player, you won’t know where all the time went. Yes, every seat back in coach is duly outfitted with one of these. The planes are clean, modern and spacious enough with decent food options and friendly staff. You can’t do much better and it makes me wonder what the heck we’ve put up with in U.S. air travel all this time…

Wild horses are everywhere, and make themselves especially home in the interior of the island

– Yes, there’s enough here for a week. I was skeptical that one could actually stay here for more than a few days and run out of things to do. If you really want to see everything on the island, you’ll need the full week. That’s if you want to see all the moai sites, petroglyphs, caves, volcanoes and hiking trails. I was there for five days (a Wednesday morning arrival and a Sunday late afternoon departure) and saw a good 60-70% of it and every major point of interest. Most people will leave out the northern coast (I did, though I had considered the 6-8 hour walk for one of my days). The extra days could give one a chance to take that hike and maybe add in a day of swimming (or taking in the Rapa Nui festival in February).

You might even make new friends not made of stone!

– You’ll really miss it when you leave. On my last day I stood at the edge of the southernmost point of the island, at Orongo Village overlooking the small islets that, looking due south, mark the last point of land between this mystical island and the final frontier of Antarctica. Good luck wrapping your head around that. In fact, I struggled with that concept the entire trip. Where was I? This was the end of the Earth in many ways. In fact, it’s said at one point the Rapanui tribes, so far from human contact, believed they really were the last of humankind. Perhaps this inspired them to build such glorious tributes as the moai? It will certainly inspire you in many ways and you may find you return home with a far different perspective of the world and your own life than you had before. You may also find a yearning to return one day – something I can’t rule out for myself!