I’m now convinced that the U.P. (Michigan’s Upper Peninsula) may be about as far as one can get from the Lower 48 and still be in the United States (sans Alaska and Hawai’i, of course)

Yes, yes, Michigan is every bit a part of the contiguous United States, but hear me out…

You want true remoteness? The community of Copper Harbor, nestled on the edge of the Keweenaw Peninsula, is arguably the furthest populated place from an interstate highway.

Want geo-oddities? Ontonagon, a town of roughly 1,500 straddling Lake Superior, sits at 89°18′ W, comfortably within the general boundary of the Central Time Zone, yet it follows Eastern Standard Time (only the U.P.’s bordering counties with Wisconsin operate on CST). In the summer, Ontonagon boasts one of the latest sunsets in all of the Lower 48 (and in winter, one of the latest sunrises). 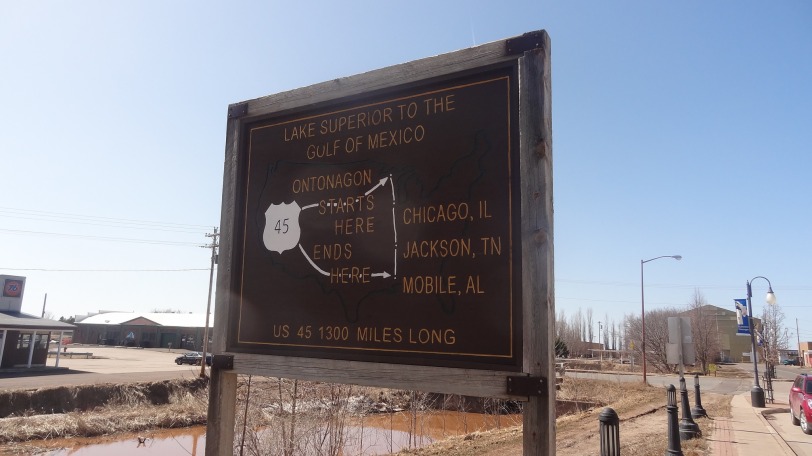 Ontonagon is also known as the northern terminus of U.S. 45. I love just stumbling on stuff like this in-person.

The U.P. is a true outpost, only 3% of Michigan’s population lives here. It’s also home to one of the most remote places in all of the contiguous states – Isle Royale National Park. Isle Royale, with a short summer season, is an island wilderness north of the peninsula. It’s actually closer to Minnesota than Michigan.

Sundance Channel did a multi-part documentary on Watersmeet, Michigan and its beloved Nimrod basketball team. Check out “Nimrod Nation” if your interested.

With Breeah and I at 48 states apiece, we mutually decided to give her a lead in the race to 50 states (a lead I held for long enough) and cut across Wisconsin to the western fringe of the U.P. this past weekend. With weather forecasts calling for a sunny weekend in the 60s, there was no better time to break out of the winter doldrums for good and head out on our first true weekend trip of the year. 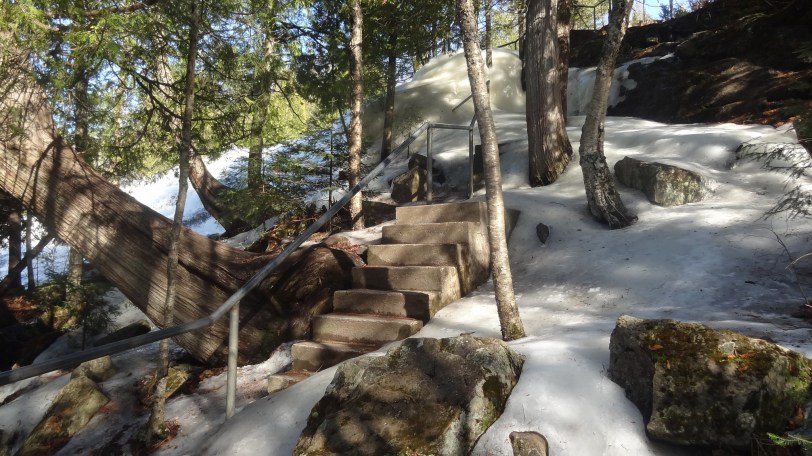 One of the more frustrating things with spring is that while you may flirt with some awesome weather, you also find yourself getting shut out by seasonal closures. This was the case this weekend in the beautiful Porcupine Mountain Wilderness State Park (affectionately called “The Porkies” by locals). The Porkies are famously home to close to one-hundred legitimate waterfalls and the Banff-esque Lake of the Clouds. However, the 30+ mile boundary road through the park isn’t plowed in the winter (its used for snowmobiles) and we were greeted by some icy, hard-packed snow on the road about five miles in. So, Lake of the Clouds was crossed off the list…

“When in Rome” moment, burying my face into a pasty (pronounced pass-tee), essentially your typically boring meat and potatoes stuffed into a pocket. Sarcasm aside, I actually did enjoy it. People in Northern Minnesota, Wisconsin and Michigan apparently live on this stuff.

We still made it to five different waterfalls (including the impressive Bond Falls Scenic Area in Paulding, Michigan), enjoyed a meal at the only cafe in Ontonagan and even found the very westernmost point of Michigan on the shores of Lake Superior.

That’s me at the top of Wisconsin.

I actually had time to nab a high point on the drive back on Sunday. Timms Hill tops of Wisconsin at 1951.5 feet (yeah, not that high) and is a short walk from the parking lot (I’d say no more than five minutes for even the slowest walkers). While state high points have never been at the top of my list (and I don’t know why), I’m now at three (Iowa and New Hampshire are my other two), so I’m tempted to grab a few more easy ones this summer. Stay tuned…

4 thoughts on “YOOPIE FOR A WEEKEND”