LAJITAS AND THE RIO GRANDE

It’s already been more than a month since Breeah and I returned from our “Southern expedition” but not a day has gone by where I haven’t been lost in thought, spurred by a memory of that trip.

One that comes to mind most often is our night in the dusty little resort of Lajitas, Texas. Lajitas is the bridge between the Big Bend Ranch State Park and Big Bend National Park. I surmise most people get there through the National Park – but we were taking the road slightly less traveled. That  road is Farm to Market 170 (FM 170) that skirts along the Rio Grande with a breathtaking view of the Mexican mountains as you meander through one of the most remote parts of our country. 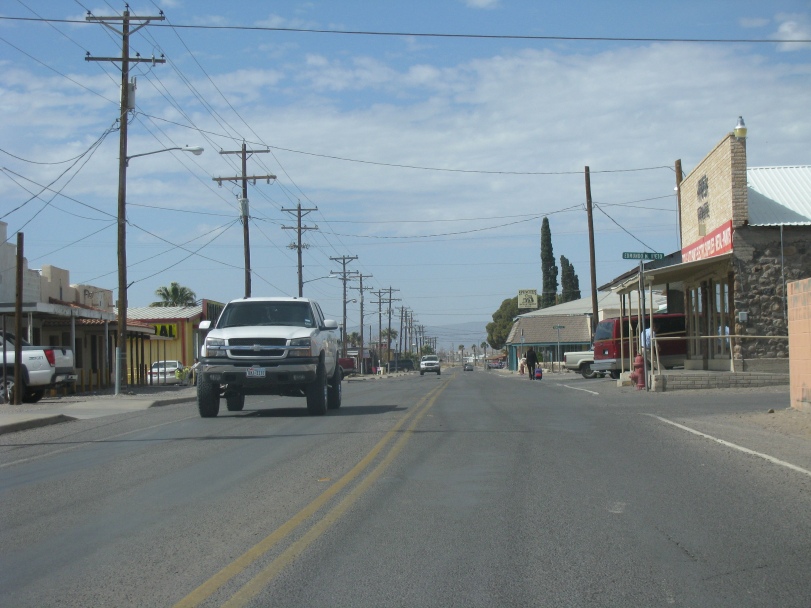 The main road through "downtown" Presidio - just keep going down to get to the Mexican border...

We had left the town of Marfa earlier in the day and drove down past the border patrol checkpoints into Presidio – a Mexican town except for the fact that it’s in the USA. Presidio’s population is around 95% Mexican and it’s hardly a tourist destination. Mobile homes and other low-rise dwellings dot the scenery which actually reminded me somewhat of  my drive through the Carolina area of Puerto Rico. We spent some time in Presidio – sampling the El Patio Cafe, which sits on the main drag and welcomes Mexican nationals, tourists, border agents and outdoorsmen alike. It’s quite a varied clientele inside the cafe, with a few Canadian bikers sitting to our right and a couple old Mexican cowboys sitting alone behind us. The food was easily some of the best Mexican I’ve had. 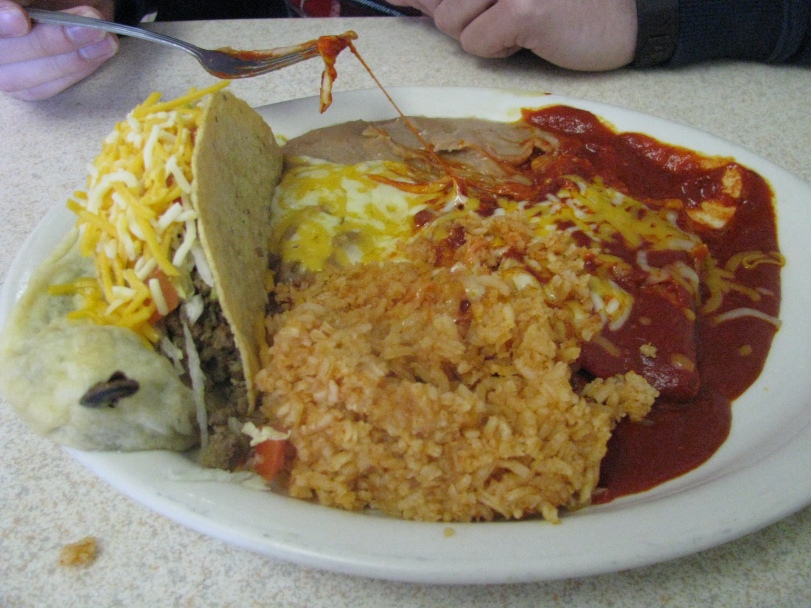 A hearty Mexican meal. Yes, the red sauce is as good (and not as hot) as it looks!

I don’t think we realized how Mexican the town was until we entered the local grocery store to stock up on snacks. Mexican music blared over the loudspeakers, employees and customers chatted in their native tongue and we were clearly the palest people there. Of course, it’s situations like these were I can’t pass up a tall bottle of Mexican Coke – made with REAL sugar.

We actually shot this sign on the way out - gotta love the handcrafted feel of it...

We left Presidio with no real intent of crossing over into the actual Mexican town of Manuel Ojinaga – even though we had passports. While the drug trade and cartel presence in border towns has seemingly worsened over the years – Manuel Ojinaga and Presidio seemingly enjoy a pretty peaceful existence in this more remote stretch of the border. That said, we would have had to park our rental car somewhere and walk over the bridge  and it didn’t seem like we really needed to spend all the effort to get across if we didn’t have a car to get around.

That's Mexico on the other side

It was on to FM 170 – one of the least known scenic roads in America. To be honest, I couldn’t believe it exists so close to the Rio Grande. Granted, this side of Mexico is arguably more remote than the U.S. side, but still, there are spots along this road where it would be so unbelievably easy to cross. At one point a little “land bridge” consisting of rocks connects the two sides. I was dumbfounded – with all the talk of securing the border down, it’s wide open right here. That said, I’m all for it. The last thing I’d ever want to see is some ugly fence dotting the spectacular scenery. That said, there are signs posted warning against crossing unless you want to be subject to a very high (think many thousands) fine, if not other criminal charges as well. (Skipping ahead – the border at Rio Grande Village in the Big Bend National Park is re-opening very soon and we just missed it…we certainly would have entered Mexico that way if we had the opportunity).

You probably don't want to walk across that bridge...

Anyway – I feel obligated to absolutely recommend a drive through FM 170. It’s relatively short but has plenty of scenic stops along the way to get out and take photos and meander down to the river’s edge. Obviously, with all the news stories and reality shows out there documenting river crossings, I had some hesitancy at first. But there is truly nothing to be afraid of down here. The road is windy and hilly and – from what I’ve read – a haven for motorcycle accidents. Just take it slow and it’s an easy drive through. Near the end is the Contrabando movie set site which was constructed for the 1985 film Uphill All the Way and has been used in various films and productions since (the Lonesome Dove miniseries being one). Just be careful when walking around this old set – it’s a haven for slivers, rusty nails and I’m sure plenty of other traps if your not on the lookout. 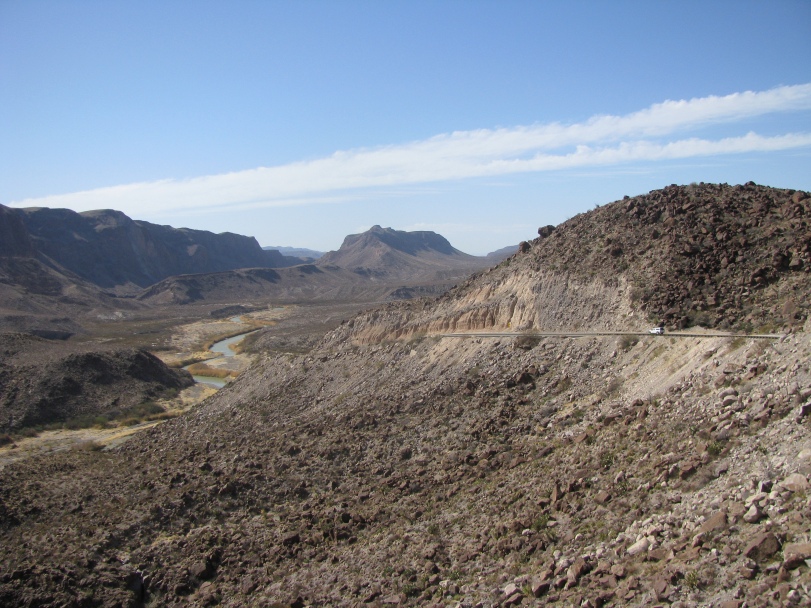 The scenery is truly breathtaking along this road...I will probably dedicated another post just to FM 170...I almost have to!

We moseyed on over to Lajitas which basically centered around the Lajitas Golf Resort. It’s not the cheapest place to stay – but really your only option in the area. It straddles a fine line between elegance and roughing it, and we were probably more on the elegant side as we somehow got upgraded to a suite (maybe because it was our first visit?). Still, this very high quality establishment is situated around a re-done Wild West-style boardwalk and the original (and very authentic) Lajitas cemetery. Yes, people lived in Lajitas and still do – so while the resort seemingly takes up 90% of it, it doesn’t totally dominate the fact that this is an outpost of a town.

The church at the Contrabando movie site

We walked around the grounds and into the cemetery where most gravesites are covered with rocks – certainly not an image I’m used to seeing. Further down the road is the general store which is also owned by the resort but is certainly not overtaken by it – it has the feel of a true small town general store with reasonable prices. We then ambled down to one of the courtyards near our room to sit near the outdoor fireplace and watch the sunset  before dinner.

It was here an old cowboy named Billy Joe (I’m not kidding) walked up and asked if we wanted a fire. We said sure as he seemed intent on hanging around anyway. We got to chatting with him and he asked if we wouldn’t mind if some of his friends showed up. Before we knew it, we were in the presence of at least a dozen Texas cowboy, cowgirls, ranchers and amateur musicians laughing, cajoling and generally having a good time. One had brought his grill with him and was frying up “Texas Fajitas” for everyone. After being upgraded to the suite we were now being served an impromptu free dinner – talk about good fortune!

I've never seen a cemetery quite like the one at Lajitas

One husband and wife tandem had a guitar and began to serenade us with pop and country ballads they had practiced on the drive over. About an hour or so in Billy Joe apologized for interrupting our peaceful “quiet time” with all this – but we we’re having too much fun mingling with the authentic Texas crowd who regaled us with stories of Lajitas past (“when it cost only $10 to park an RV here and party all night”) and their general disdain (to be kind) for the current state of the government.

Welcome to Lajitas - where the mayor of the town used to actually be a beer-drinking goat...You can't make that up!

More people joined in – and at one point I could count about 17 of us. One darker looking cowboy hung in the shadows watching the group for awhile. This man was quite the imposing figure – tall and rough with no shortage of hair and a well worn cowboy hat. He asked Billy Joe if he could bring his guitar and put on a show of his own for us. The man came back, guitar in hand, and soon took center stage in the circle. By this point dusk had turned to dark, the warm feel of the  Texas sun had turned into a brisk February night and the warmth of the fire was quite welcome. The man introduced himself as George Goss – a local from Lajitas but originally from the “bootheel of Missurah” and his companion, an Alabama original (with a bushy beard) and his girlfriend – a stick figured cowgirl who concocted cowboy “rap” tunes in her spare time.

This place was rocking about an hour after this picture was taken...

George – if anything – is a man of unbridled passion when it comes to music. You have to respect a guy whose sole interest is to make music and live music 24/7. He’s living a happy life on whiskey and gin in the dusty Chihuahuan Desert – I mean the guy was literally chugging whiskey between songs, I don’t make this up.  His old style country western is about as grassroots as your going to get and a picture of him should be placed right by the definition of salt of the earth. Heck, the guy probably just rose up right from a nearby rocky outcropping. I could go on with the adjectives, but he’s filmed himself for youtube, so you can get your own look of him…

Before we left he grabbed me aside to ask where I was from – of which I told him Montana (which was and always will be my true home). “Is thar internet in Montaner?” he asked. I told him I run a little travel blog. “Well you tell um that they need to go to broken strings studio dot com and there is free music they all can, you know, download.” I told him I’ll tell them all about it. So to honor those wishes – here’s a link to George’s production studio.

We were having too much fun to worry about pictures I guess, which explains our regretful lack of photos of the cowboy party. We managed to get this one taken of us - the rest will be embedded in our memories!

Hugs, handshakes waves and best wishes came from every one of those in the gathering as we left, knowing that we just had experienced the most authentic taste of Texas and the Big Bend region anyone could wish to possibly have. It’s moments like those that motivate me to keep traveling our great country.

3 thoughts on “LAJITAS AND THE RIO GRANDE”