DOWN THE OL’ NATCHEZ TRACE 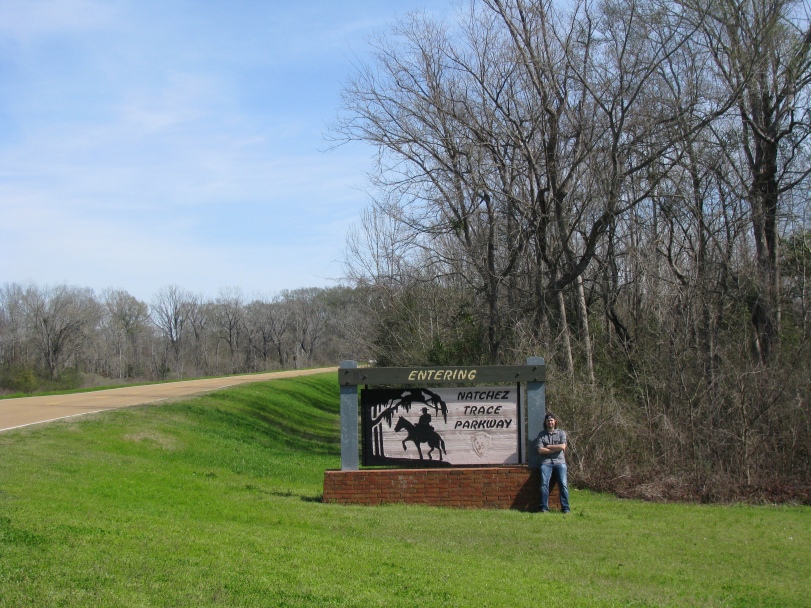 My first post of our week-and-a-half long adventure doesn’t start from Day 1 – of course, there wasn’t that much to say about Day 1 as we drove from the D.C. area all the way down to Rome, Georgia (though we did stop at the twin towns of Bristol, VA and TE as well as for some amazing pizza in Knoxville). I’ll certainly touch on those some point down the road…

Fast forward to the third day of the journey, after an night in the outskirts of Jackson, Mississippi (a town called Flowood). We geared up for a morning ride into the Natchez Trace Parkway en route to the river town of Natchez for some sightseeing and good BBQ.

I’m a big fan of the old routes – and I’m not talking about Route 66 (though we did join up with parts of that classic road on the back end of the trip). I’m talking hundred years old paths carved into the earth. Old trading routes, wagon routes, hunting routes – whatever. These were the original American roadies and I, in a roundabout way, feel honored to make the same pilgrimage they did – though through far easier and safer means (I don’t think I had to worry about bandits or the likes of John Murrell, unless I was fortunate to avoid such characters along the road). 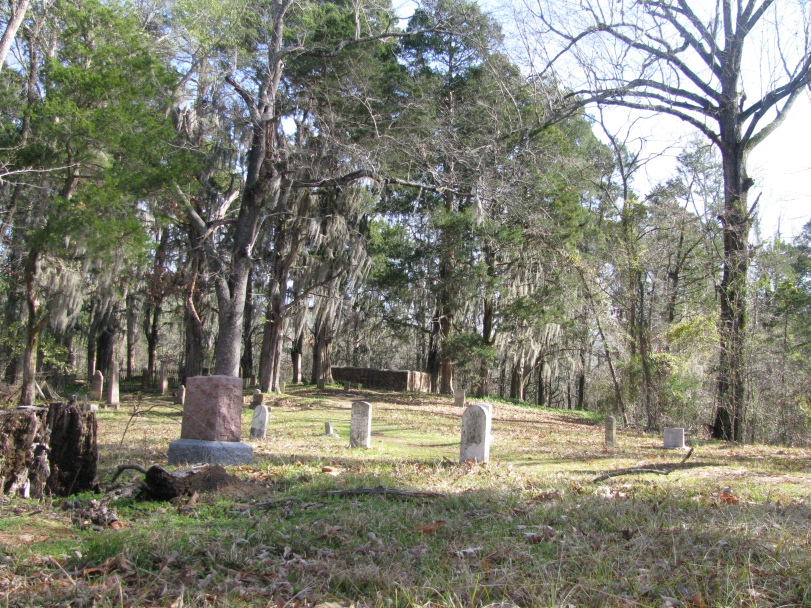 The graveyard behind the church

The serene drive through the Natchez Trace Parkway actually begins way up in Nashville, but we only traveled the route from Jackson to Natchez. Yes – it’s a long two-lane road mirroring the same route of the original trace for 444 miles. At 50-miles an hour, your looking at a very long and patient day on the road if you decide to drive the whole thing in one shot. Our section of the road ran through various countryside including farmland, woods, rivers and bayous and various historical stopovers. Every now and then you’ll see deer or an egret – but the wilderness is quite tame here (I wasn’t really expecting Bigfoot in Mississippi). What’s amazing about the parkways is how pristine it is – the grasses were trim alongside the pavement and the condition of the road is better than any interstate you’ll ride on. It was a fantastically smooth and pleasant ride to Natchez.

Standing in a portion of the original "sunken" trace

Along the way we stopped at Rocky Springs – a ghost “town” off the parkways. All that’s really left of Rocky Springs is a Methodist Church and a cemetery which are both still in use. The rest of the town is just various remnants – a safe here, a stove there – scattered throughout the brush. Apparently the population of this town hit into the thousands before plummeting about a hundred years ago, in no help to the poor land and terrain that the once thriving community was situated on.

Downtown Natchez is quiant and colorful

We also stopped at an Indian mound – but it wasn’t the famed Emerald Mound (the second largest mound in the U.S.) – I got crossed up with my mounds and went to a much smaller one (the Mangum Mound) near Rocky Springs instead. Oh well, I guess… 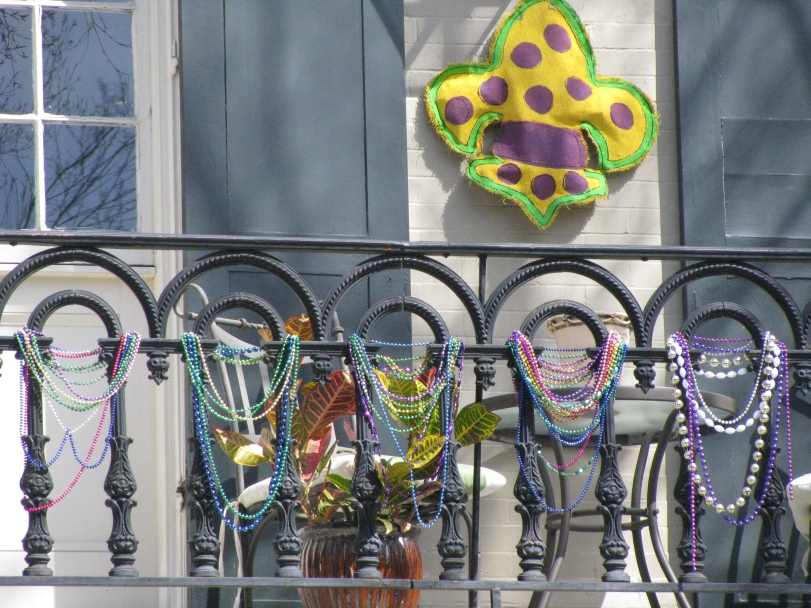 The place was decked out for Fat Tuesday

Lastly we visited a portion of the original sunken trace. Now – why the trace is “sunken” (and it is, at least 12-15 feet) is beyond me. It’s hard to believe that there could be that much erosion in such a short time span of history – but the trail was used often (it was the main passageway into the South for so long) that I guess it shouldn’t be surprising. It’s almost like a little canyon and reminded me of the eroding cliffs of Prince Edward Island, with little juts and pieces  of the walls crumbling off over time.

We arrived in Natchez near noontime and found easy parking within the downtown district. After being in D.C. for about a year now, it’s still hard to fathom when parking is so widely available. I kept thinking I was parking illegally somehow. Nope – I’m parked right in front of the picturesque court house and I don’t even need to fill a meter!

The historic Eola Hotel "towers" above the skyline

Natchez is like a miniature New Orleans French Quarter – though I’ve never been to New Orleans, so maybe I should hold off on direct comparisons. The iron-fenced galleries of Bourbon Street can also be found in Natchez. As it was the Monday before Fat Tuesday, Mardi Gras beads were hanging from the railings and trees throughout and special wreaths and decorations adorned most of the antebellum houses in the area. The Eola Hotel – a skyscraper of sorts for the small town – is one of the centerpieces, though it’s trying to be outdone by the Grand Hotel near the waterfront. Natchez-Under-the-Hill, a formerly seedier side of town, can be viewed (or walked to via trail) from an overlook of the Mississippi River, as it sits right next to the shore.

Breeah gets a good view of the Mighty Mississippi

We ate at the Pig Out Inn BBQ – which comes highly recommended through a yelp.com search (I tend to do all my dining preparations through that site now). The Ribs are fantastic and relatively cheap and you can’t go wrong if you are looking for traditional southern BBQ – which happens to be a favorite of both Breeah and I.

The Pig Out Inn BBQ was awesome!

We also stopped by the Natchez Historical Park, an NPS site that protects both the Melrose Plantation and the much smaller William Johnson house.  Our visit was to the plantation (the Johnson house is a much smaller piece of property right downtown) which protects the slaves living and working quarters, a couple barns and the large McMurran house. We skipped the tour of the house but toured the grounds and the slave quarters – it is still amazing to see how cramped these poor people lived. The spaces are barely comfortable for one, if that. The general grounds are beautiful, speckled with tiny picket-fence gates, water fountains and a little cypress swamp as you drive in. It’s an easy site to stop and walk around for a few minutes (and get your NPS stamp!) 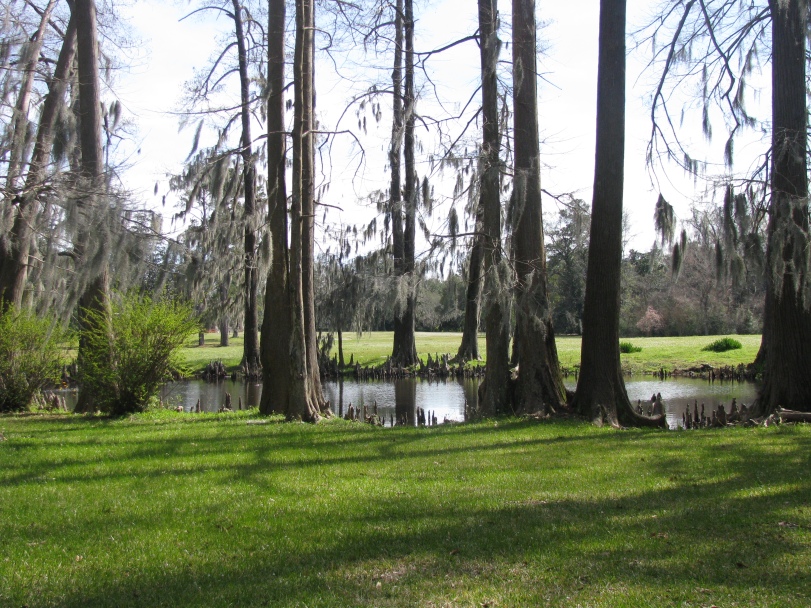 Our time in Mississippi was over once we crossed The Natchez-Vidalia Bridge into Louisiana and then onto the Bossier City-Shreveport area for a night of gambling and recouping at the Boomtown Hotel (We didn’t lose much money – I promise). We we’re inching towards Texas and ready for the undiscovered (to us) desert lands of the Southwest!

3 thoughts on “DOWN THE OL’ NATCHEZ TRACE”