21 MILES, ONE DAY, AND A BEAUTIFUL, RUGGED ISLAND

Tormod is my crazy Norwegian friend. Maybe that’s just how I see him. Maybe it’s just because he’s as crazy as me. I wish I knew more crazy people like him, the kind that dream up new ideas for life goals and adventures on an almost-weekly basis. Those people are truly the most fun to be around. Every now and then, you actually try on of those ideas on for size.

This was one of those times.

Tormod standing on a rock on the Montanon Ridge trail, overlooking, well, nothingness.

Tormod and I met a few years ago through my wife’s mutual friend. I suspect Tormod drives his wife as crazy as I do mine with our shared passion for a non-traditional, “life is a daily adventure” philosophy. I went up to Adak, Alaska with the guy just a few months back (you can read more about that here) and a impulsive trip to the Channel Islands was set to be the sequel.

Two full days camping. No showers, no fire and no set plan. We just had our feet to hike around as much of the island as we could.

Heck, this could be the Canary Islands if you didn’t know it. Unbelievably scenic

Which quickly brings me to the final day of the trip.

Our plan was to hike the Montanon Ridge to the high point of this part of Santa Cruz Island (the part managed by the National Park Service, and not the Nature Conservancy). This 8 mile round-trip from the campground takes you up and over the morning clouds up to a radio tower, where we stopped for a break and a early lunch (it was only around 10:30 a.m.) and took in the ever-increasing view through the cloud burnout.

We doubled up by adding another 8-miler in the afternoon, hiking clear across the the eastern swatch of Santa Cruz to the Smuggler’s Cove beach. I will say this – heed the “strenuous” warnings in the National Park trail guide. There are long stretches of uphill sloping to tromp up and it absolutely wears you out, despite the relatively innocuous appearance from afar. Water is an absolute must. For every 8-miles I recommend two full water bottles per hiker (we saw a few people just holding one small bottle – which is just plain stupid). Thankfully – there was a ample sized cooler for refilling, as well as a nearby campsite with more water jugs (though we weren’t sure these could be used by hikers passing through).

Enjoying a tuna sandwich at the high point

The kicker was our last hike. The Yellowbanks trail continues back inland from Smugglers Cove and towards another, slightly more scenic beach (perhaps because you get a better vantage point than at Smugglers) as well as a nice view of the olive tree grove at Smuggler’s. Yellowbanks is a further three miles round trip from Smuggler’s and is an absolute bear as well, especially after a logging nearly 18 miles as it was (my calculations are based on our entire day of walking, not simply trail distances). There was only one other pair of hikers on this this trail and it does feel like its relatively lightly tread.

On to Smuggler’s Cove…the Yellowbanks trail continues to the right, as you can see on the ridgeline.

The Yellowbanks trail seems to end before the beach. Actually, quite a bit before the beach. In true Tormod-style, we decided to tumble down through the 6-foot grasses and loose rock to the actual beachfront. I absolutely do not recommend this – as the walk back up is ridiculously steep and you have no trail, just bushwacking through the same freakin’ grass. If anyone actually knows of a real trail down to this beach, please enlighten us. 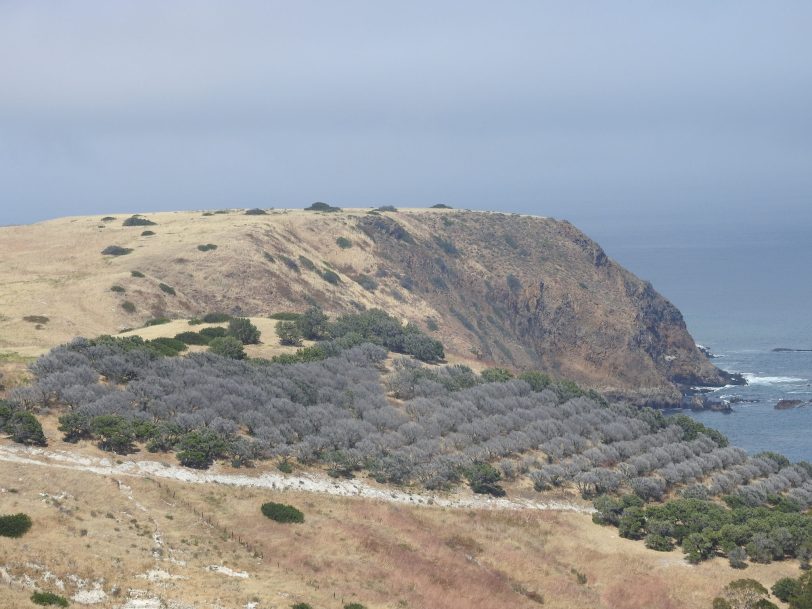 Olive tree grove at Smuggler’s, viewed from the Yellowbanks trail 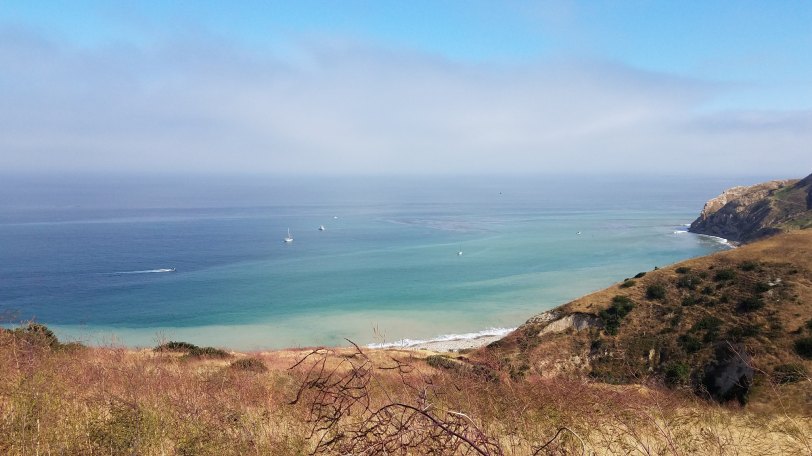 The view of the beach from Yellowbanks

The rarely hiked to beach at Yellowbanks.

At the end of the day, as you probably guessed, we logged a healthy 21 miles of hikes. All told, we hit 30 miles on our two day hiking odyssey on Santa Cruz. Every step (except for a few loose ones at the end of Yellowbanks) was absolutely worth it.

2 thoughts on “21 MILES, ONE DAY, AND A BEAUTIFUL, RUGGED ISLAND”