SIX YEARS, FIFTY STATES: ON TOP OF THE WORLD (IN BARROW)

We were cold and tired, the otherworldly thrill of transporting ourselves northbound from Oregon’s Willamette Valley to the last vestige of American soil in the Arctic (in a matter of 19 hours, no less) is both a mind and body shock. 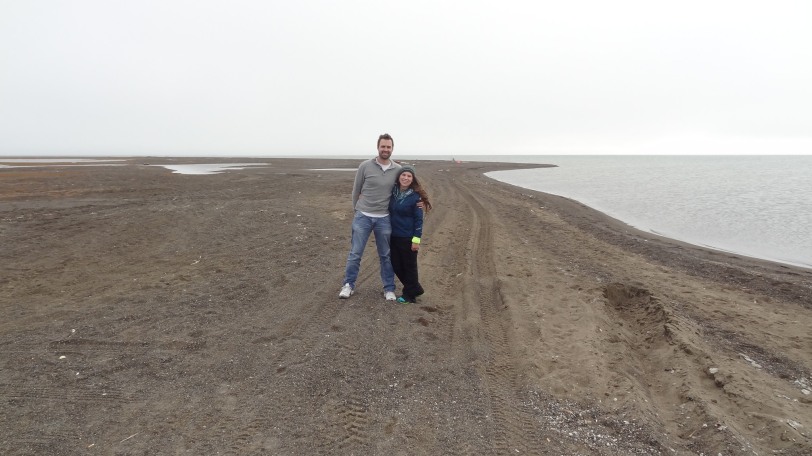 Breeah and I at Point Barrow, as far north as you can go in the United States

It was supposed to be easy, a relatively quick three hour flight up from Anchorage (via the oilfields of Prudhoe Bay), a tour of Barrow (the northernmost settlement in the U.S.) and an evening flight back. Instead, we have just deposited a cool $189 towards a room at the Airport Inn – Barrow’s saving grace of a “budget” hotel. Here we are, 71 degrees north, with a day pack, a few dry, uninspiring snacks and just the clothes we are wearing.

An icebow over the Arctic Ocean

See, Barrow’s airport can’t handle landings in low visibility, so our Alaska Airlines return flights were nixed that evening. The outlook for the next few days: bleak. We feared our Labor Day plans could be well on their way to a North Slop hijacking! 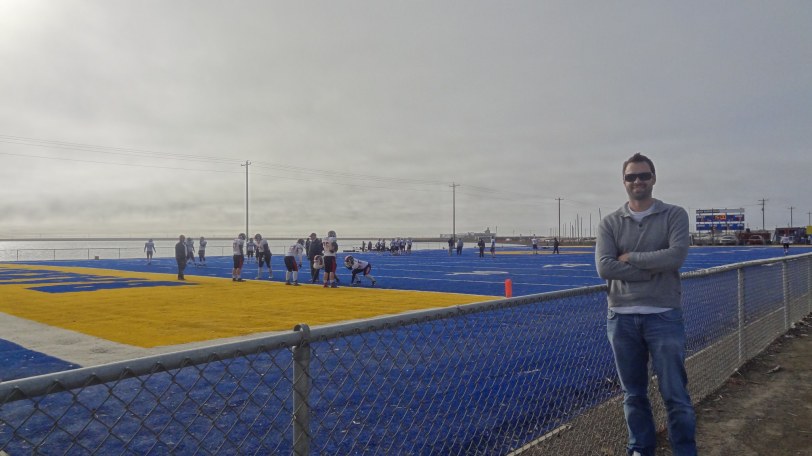 The Barrow Whalers, made famous by an NFL Network series, are the only high school football team north of the Arctic Circle. Their field is just feet from the Arctic Ocean! That’s the North Pole Patriots (Fairbanks, AK) warming up behind me

Well, it was mostly my fault. As a youngster I always wondered about this mystical land called Barrow, that of famous -70 degree wind chill days spotlighted on the weather reports. So, naturally, I decided that with Breeah and I finally reaching our 50th state with Alaska, why not go that extra mile(s) and celebrate our traveling triumph at “the top of the world”. We’ve been together since October of 2010. We each had a few states under our belt already, but in the near six years that followed, we’ve visited all of them together. It wouldn’t be the least bit crazy to spend one day of our three-day weekend in Alaska taking a flight to the Arctic, right? Well, I dragged us up here, and now we might be stuck for a few days… 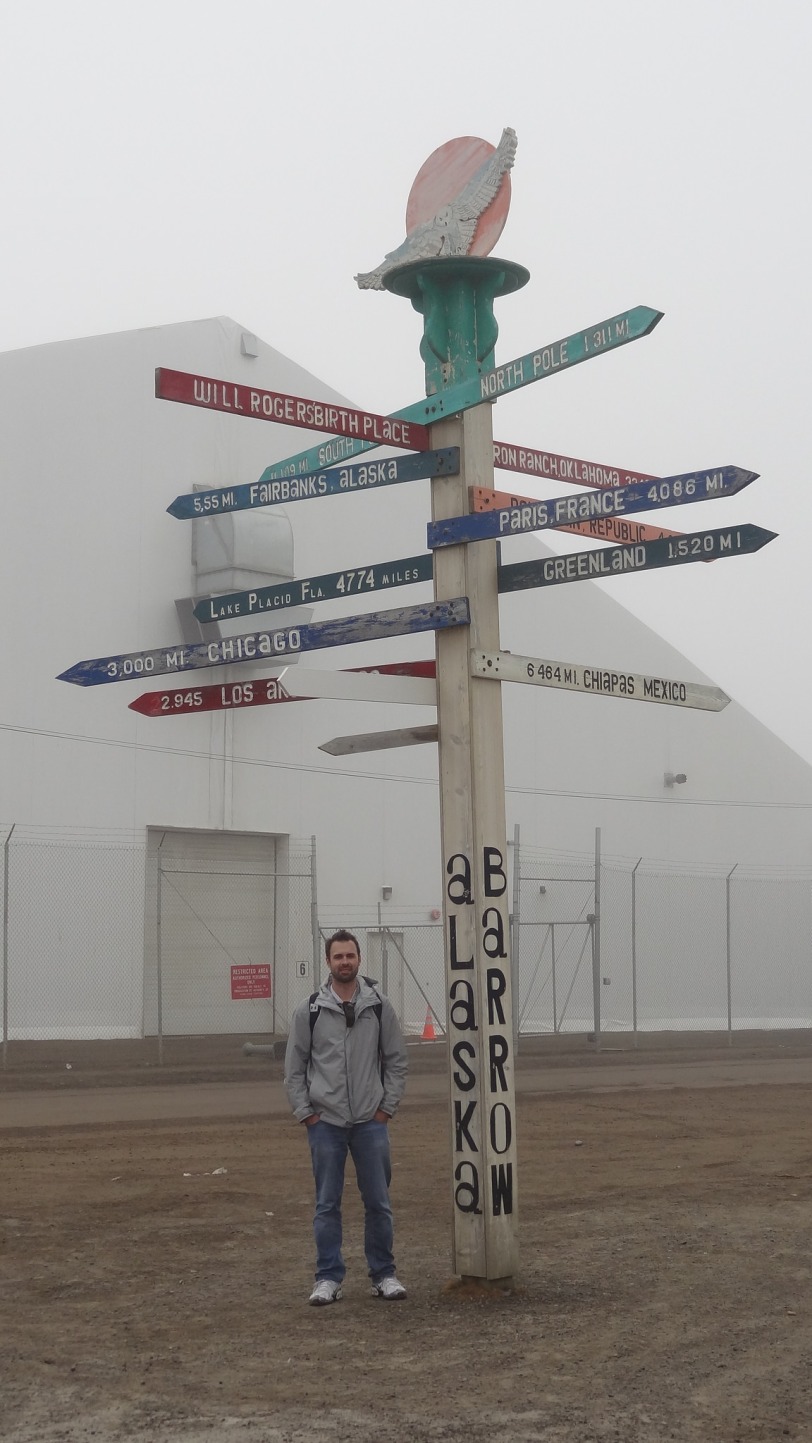 But, alas, what a place to find oneself! Staring out onto the hardscrabble town of Barrow from the Airport Inn window, I couldn’t have envisioned a place so far from the traditional, the ordinary or even the extraordinary. This was just plain lunacy, right? I mean, we are a mere 1300 miles and change from the North Pole! We are somehow in the United States, yet I feel like I’m on another planet entirely. Are these 4,000 or so souls the first to settle Mars? I’m not getting back anytime soon, maybe I’ve been tricked into leaving Earth entirely. Where am I?

Rent for this place would probably be at least $2,000 a month and I’m not even joking.

Earth to Philip, we’ve located you and your lovely fiance in the U.S. state of Alaska. You are not, unfortunately, on Mars.

Good. Though maybe save me a ticket, that sounds cool too.

Satellites are pointed to the horizon to a relay beam that then redirects the signal up into space.

My thirties have been defined by checking off childhood dreams torn from almanacs, comic books and the odd assortment of real-life mystery books at the grade school library. Barrow somehow snuck itself in that list and has been that far-off place that has been needling at my soul for years. Somehow, that $700+ flight hasn’t been convincing enough. But this time I had loads of miles to burn and Alaska Airlines was more than happy to cash them in! 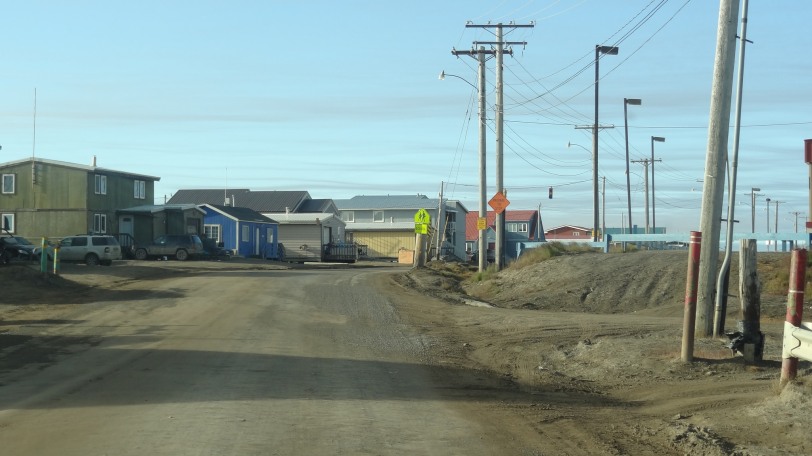 It was that 12-year old inside me now that screamed with delight the moment our guide drove us to “the point”. Point Barrow – a few miles to the northeast, is the northernmost point of land in the U.S. Breeah and I alternated turns at being the northernmost person in our country, snapping pictures, laughing, dipping our hands in the freezing Arctic ocean, it was fantastic fun. I honestly had no desire to leave, but the brutal windchill naturally beckoned us back to our patient guide and his heated up 4×4.

I’m in a boat (yeah), I’m going…nowhere. I was the northernmost person in the U.S. in this photo, obviously I was doing some very important stuff.

The rest of our day was littered with all the other quirks that come with such a destination: The inflated prices at the grocery store, the northernmost, well, everything (school, football field, post office, airport, chinese restaurant, warm meal, etc…) and just the relative weirdness of being so isolated and out of the familiar realm of your own country, while still being in your own country.

The fascinating culture of the Inupiat people is the brand of Americana that you’ll find in Barrow. The Inupiat Heritage Center (an affiliate of the National Park System, complete with a passport stamp!) is a must-see stop to get up to speed on this unique slice of the country and the people who make it special. These people hunt whales up here, a tradition unmatched by 99.999% of the rest of the country. It is truly extraordinary.

The next day began as the last one ended. The ghostly , fog-adorned roads in town did not offer much promise in getting out. However, as the minutes ticked closer to our late morning flight, the sun began to poke through the clouds and burn a line of sight for the plane to land. Soon we’ll be jetted back to the mainstream.

Don’t confuse this Airport Inn with other Airport Inn’s, this is the real deal yo. This is the only place to stay in Barrow if you still love your wallet.

The next couple months will not bring much warmth to Barrow. September will be cold, October even colder. Days will get shorter and shorter until they are no more. Its just part of the unique life the people up here make for themselves. All we can say is we feel so blessed to have met the people and seen their unique place. We may enjoy what we make as our own home, but we will always remember our short visit to Barrow as a true defining moment in our lifelong adventure.

7 thoughts on “SIX YEARS, FIFTY STATES: ON TOP OF THE WORLD (IN BARROW)”