EVERYONE KNOWS SAIPAN…WELL, AT LEAST YOU SHOULD 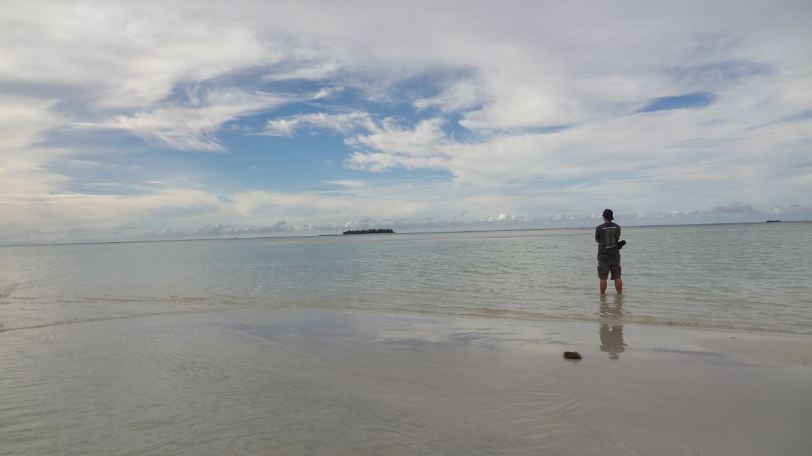 I had just told him I was from the U.S. (“Stateside”, I said, “…Oregon”). Apparently the CNMI and Oregon share at least one thing – you can’t pump your own gas (you could in Guam).

“Yes, yes of course I know Saipan,” I exclaimed. “Everyone knows Saipan,” I continued to embellish, “Everyone remembers the quarter. You know, the Mariana Islands quarter?”

“Yes, yes,” he guardedly replied, I wasn’t sure whether he believed me or actually remembered the quarter. 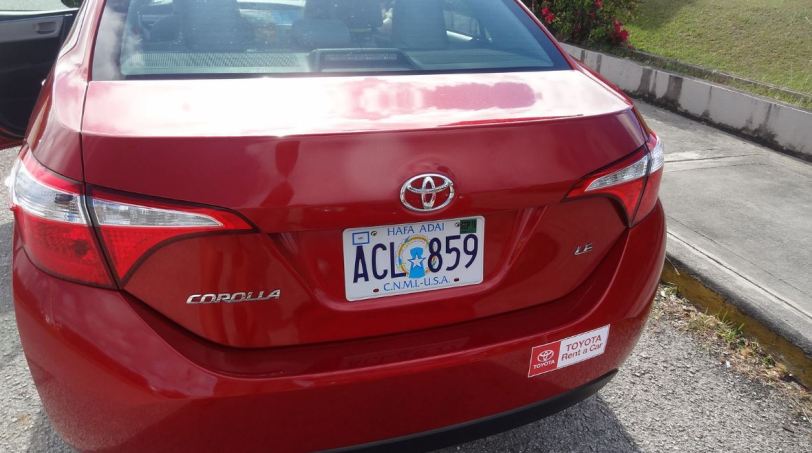 The U.S. established a commemorative state quarters program that lasted from 1999 until 2008. In 2009 the treasury minted quarters for the D.C. and the five populated U.S. territories. Northern Mariana Islands was the very last quarter released in the program and was (by far) the least minted with “only” 72-million made. It was that minting, however, that brought the Marianas into a mainstream focus in the continental U.S. You could assume that the average American is at least somewhat aware of the existence of Puerto Rico in the U.S. geopolitical spectrum. You could also probably assume that the American-branded U.S. Virgin Islands and American Samoa ring a bell for that same slice of the population. Guam may prove foggy for some, but the Northern Mariana Islands are usually that “fifth one” that people miss when you ask them to name our territories.

Ladder Beach, a rocky, yet extremely photogenic beach. Our only real sunny part of the day that morning

Ladder Beach even has a large cave for some natural shelter

The Commonwealth of the Northern Mariana Islands consist of Saipan (where most of the population is located), nearby Tinian (known for the loading area of the bomb that was dropped on Hiroshima) and Rota. The chain extends northward with a variety of uninhabited islands. Guam completes the chain of the Mariana Islands, and while the CNMI has voted to include Guam and become one singular Mariana Islands entity, Guam has rejected the proposal (speaking from what I’ve just briefly read, some of this stems from resentment over the Chamorros in Saipan assisting Japanese on Guam during World War II). 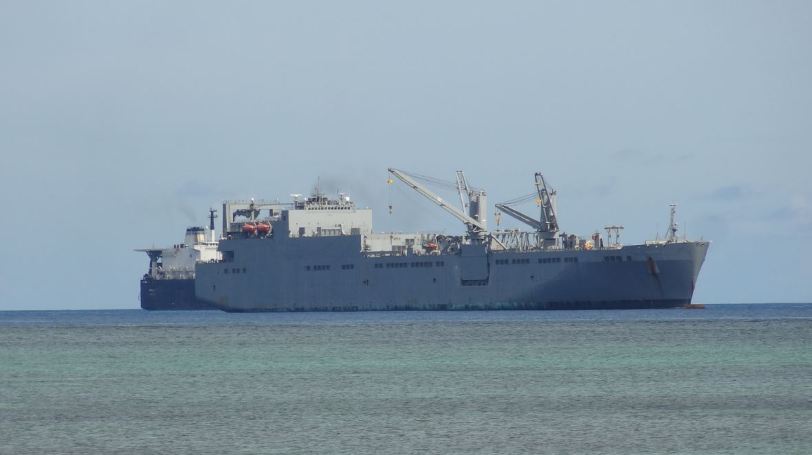 Some serious ships in the waters around Saipan

U.S. Postal Service, at your service – even in far away Saipan

Saipan was hit hard by Typhoon Soudelor in August of 2015, a storm that destroyed and damaged countless numbers of homes and businesses. Basic services, especially electricity, were unavailable in some areas for many weeks. The Commonwealth was declared a U.S. federal disaster area and received nearly $26-million in aid towards restoration. You can definitely see the effects of the storm on the CNMI upon touching down in Saipan, the island has a more hardscrabble appearance in relation to Guam. There are gutted out buildings and large hotels sitting empty. The clean-up and rebuild is still very much apparent. 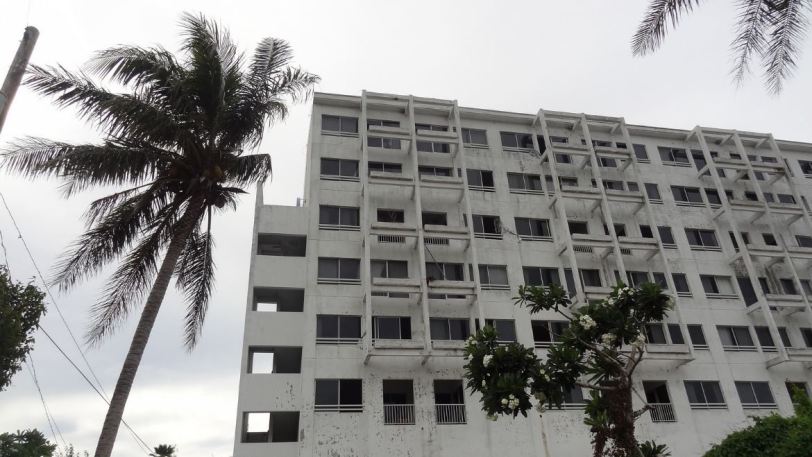 The island still has a ways to go in repairing the damage done from the 2015 typhoon.

We only had a day to explore Saipan, which is enough if your doing a site-to-site self-tour of sorts. To get to Saipan to Guam you have one option: United Airlines. The U.S. carrier has a monopoly on most of the island hopping in Micronesia, including Guam and Saipan. There isn’t a ferry nor is there a locally-based commercial air service. You are left having to purchase a fairly pricey United ticket (considering the short distance). My thinking was that we came all the way out to Guam, and, when in Guam, well, you might as well try to get to Saipan too. A territorial two-for-one made way more sense since I wasn’t sure when or if we’d be back out that way.

American Memorial Park is the CNMI’s only National Park Service-affiliated area. The park service does not formally count it as one of its official units, but National Park junkies should make a visit anyway. The museum is top notch and they have a park stamp for your passport!

Wing Beach, with some WWII-era relics scattered on the shore

Wing Beach was littered with some great sea glass!

Our first stop was to find some sunscreen – so we visited the kitschy I (heart) Saipan store in Garapan. I don’t think I’ve ever seen so many cheap trinkets in one place, the selection of overpriced magnets alone would have humbled any American boardwalk junk store owner. Don’t get me wrong, I do have a fun little box of junky little souvenirs I collect from everyplace (I do try to get stuff that is made in the places I visit too, those I’m a little more proud of). 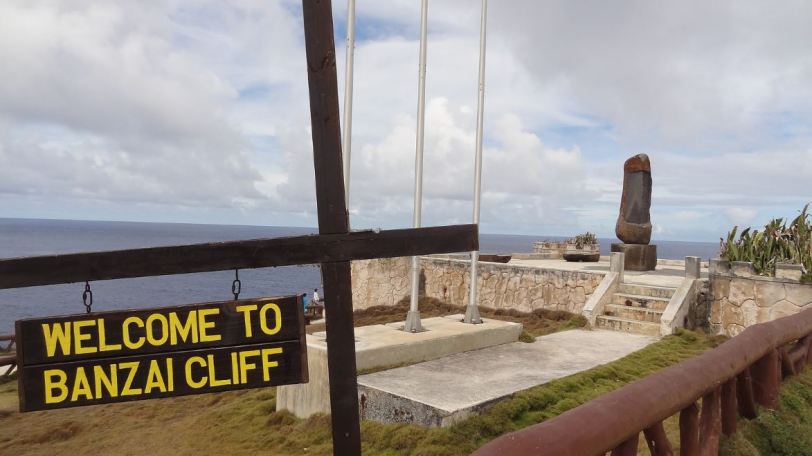 Banzai Cliff area on the very northernmost end of the island. This is essentially the furthest north most people usually get in CNMI. Islands north of here are uninhabited.

The view off of Banzai Cliff, where many Japanese soldiers met their end…

We had a “Amazing Race” moment looking for the post office. I often try to mail postcards out from the far-off places I visit – but the Saipan USPS branch proved difficult to locate. I nosed around the area where the government buildings are located (a village aptly called Capital Hill) and received directions from a friendly local official. A tiny little USPS rural branch, staffed with one employee, was unceremoniously hidden on the side of a relatively unremarkable building, no signs to direct anyone as to its location. I deposited my mail and picked up my next clue…(er, wait, we weren’t actually racing here…)

From Banzai cliff, you face Suicide Cliff to the south, and other memorial markers

Another view of Suicide Cliff from the Banzai Cliff area

We doubled back to Garapan to visit the National Park Service-affiliated American Memorial Park. The park contains a museum detailing the island’s history during World War II. It is staffed by a National Park ranger from the continental U.S. and by all appearances inside feels like a full-fledged National Park site. The ranger explained to me that because CNMI has an indigenous land ownership clause (in which all land is owned by the CNMI), the park service technically cannot ever own the property – and can only contribute through the affiliate status. He was quite impressed by my 2016 National Parks anniversary t-shirt, something they hadn’t received for their gift store ;-). American Memorial Park is also due for a mainstream American acknowledgement of its own, it will appear on the U.S. quarter in 2019 – part of the America the Beautiful quarters program.

There is a park near Banzai Cliff (called Marpi Point) that memorializes and protects the last Japanese stronghold on Saipan.

A Japanese tank, overcome now by the Earth, sits at Marpi Point park

We drove up to the northern end of the island and visited Wing Beach, a completely deserted stretch of sand that doubles as a turtle hatchery. We didn’t see any turtles, but spotted an octopus maneuvering its way around the shallows.

View from Suicide Cliff, Banzai Cliff is at the very north end. A memorial cemetery is to the left.

We wrapped up the afternoon with a whirlwind tour of WWII sites, including Banzai and Suicide cliff – a spot where Japanese soldiers jumped to their death to avoid being captured by U.S. forces. It has become a popular site for visitation by Japanese tourists, as many were visiting the day we were (and even the small concessionaires set up were operated by Japanese people). As the rift between the U.S. and Japan mended quite quickly after the war, the memorials act as sort of a sobering reminder of the human element of war – the pain, the loss, the suffering…

Bird Island is on Saipan’s northeast coast and is a sort of symbolic image of the CNMI. It does have a very Oregonian feel to it, doesn’t it?

On a much lighter note, we spent our evening back in Garapan and took in the Saipan Thursday night market, where vendors set up selling their BBQ’d food and snacks and live music keeps the party going until the late hours. While somewhat muted in contrast to the crowded Wednesday market in Guam’s Chamorro Village – Saipan’s street party is just as, well, tasty. There are tons of different BBQ-on-a-stick options here, but we played it safe with some very tasty pork and chicken options (I wasn’t too keen on trying the pigs ears or intestines). 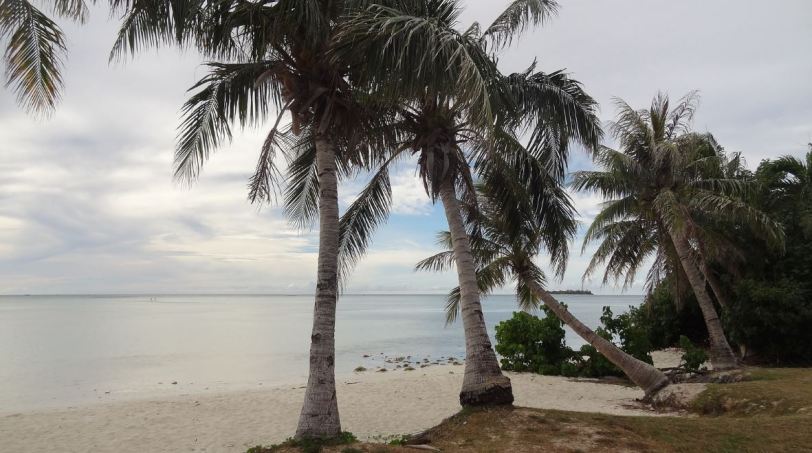 Micro Beach near Garapan is considered Saipan’s best swimming beach. Its also the beach I used in my header image for this post. Sandbars galore at low tide!

Time to feast at Saipan’s Thursday night market. BBQ-on-a-stick for everyone!

I’m glad Breeah and I were able to notch a visit to the CNMI and gain some first-hand knowledge about a very important part of our country. While I understand not everyone is in position to travel like we do, I wholeheartedly recommend putting the U.S. territories near the top of your travel bucket lists – especially the Pacific Ocean territories. There is a certain charm to Saipan, a friendly local culture, a place relatively devoid of tourist traps (at least traps targeting Western tourists) and the feeling of being way off the beaten path while still enjoying the relatively comfortable embrace of being in one’s own country. Hey, and if I can convince a few more would-be Caribbean-bound tourists to ditch those plans for a trip to the Northern Marianas, maybe that gas station attendant will fondly remember that guy who told him that everyone knows Saipan.

4 thoughts on “EVERYONE KNOWS SAIPAN…WELL, AT LEAST YOU SHOULD”