Big Major Cay could be one of any of the hundreds of uninhabited islands that dot the Bahamas, except for one thing, it has pigs (and only pigs).

Yes, about 20 or so wild pigs make Big Major Cay (also known as Pig Beach, Pig Island or Pigs in Paradise) their home. The only way to make it to Big Major Cay is by boat, so either come equipped with your own or take a boat tour (we booked with Four C’s Adventures in Great Exuma). The island sits in the middle of the Exuma chain, about an hour or so north of George Town.

Sir Oinks-a-lot comes out to greet the vessel, along with his compadre, Squealy McSquiggly

Travel is often defined by the unique experiences you can’t replicate. I don’t know where else swimming pigs exist, but I doubt anywhere else that these pigs are given their own beautiful tropical island to frolic in (God bless these pigs, they are living the dream). It’s not like it isn’t making money for the chartered tours, so someone does benefit by the existence of this quirky nature “reserve” of sorts. I say let it go on for as long as they can sustain (and here’s hoping they introduce new swine to the lot to curb inbreeding – something I assume they do already). 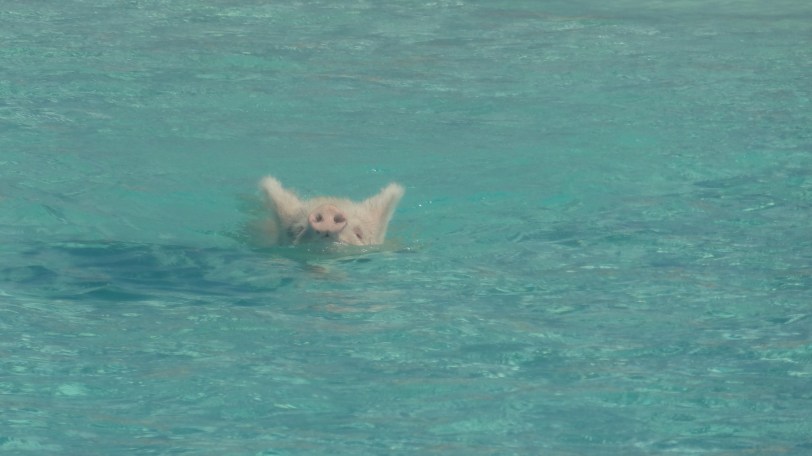 That’s pretty much how I look when I swim…

As our tour boat comes to shore, the biggest and burliest of the lot are already swimming out to greet us, and, presumably grab a tasty snack or a Diet Coke (as our friendly host suggests – they apparently love that sweet, sweet aspartame). I can’t speak for the nutrition of these pigs, but I witnessed one drink urine as it was expelled from another pig (which prompted one of the tourists to exclaim, “21 or over to be on this tour!”).

These pigs weren’t interested in posing, as you can see…

Dining habits aside, the pigs are a real fauna-tical (I like coining new words) oddity. Apparently they can and will bite (and they will go for low hanging fruit, so to speak), but good common sense is not to tease them with food or feed them by hand. I never felt threatened by the pigs, but I never let them get too close. By their demeanor you could tell that they were used to being the stars of this spectacle (or maybe they thought we were the spectacle) as they slowly meandered about their beach.

They apparently suspected my friend, Tormod, of having all the food…

The biggest question, for me, is how exactly these pigs got here. Google isn’t as much help as you’d expect and Wikipedia has a variety of cited explanations, none of which match the story offered by our tour guide (that of which the pigs were saved from the Desert Storm war, and brought to Bahamas…hmm….)

Regardless of their provenance, these wild pigs have it made and surely found a more fortunate life than most of their brethren. May they continue to feast on snacks and Diet Coke for as long as the islands will have them.

One thought on “WHEN PIGS…SWIM”