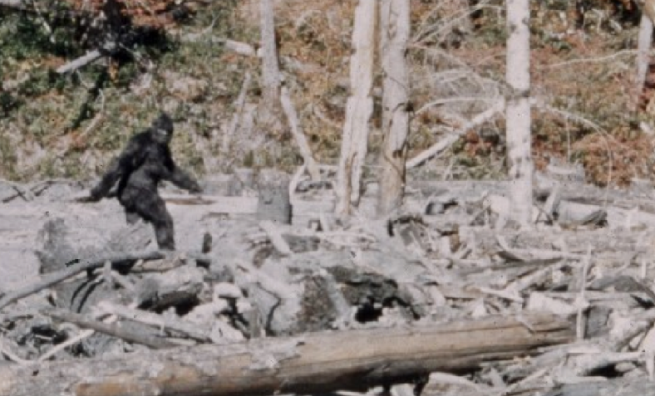 I grew up on the “true believer”-side of the Bigfoot debate. I’ve always lumped the mysterious hairy bipedal with UFOs and ghosts in a sense that nothing is truly beyond the range of possibility (a.k.a. we can’t pertain to know EVERYTHING about our world and surrounding universe).

That said, the skeptic in me has come out more and more as I’ve grown up. I still believe in the possibility of a Bigfoot SOMEWHERE, but the reality TV nonsense that is out there now does little to add any favor to the cryptofanatic side of things. If you think Animal Planet’s Finding Bigfoot is a joke (and I actually enjoy that series somewhat, despite them never finding anything but a few small forest animals), then take a look at Spike TV’s $10,000,000 Bigfoot Bounty. Apparently they’ve interviewed people who have confessed to shooting a ‘squatch. Put it this way – if there was “real” proof in the form of Bigfoot’s body, we’d have a news story like no other. Nobody has proof like that and to believe otherwise is foolish.

My personal belief lies somewhere just above skeptic. I think if Bigfoot does exist, then it’s carved out a living in the more remote, heavily forested areas of the world. The northern parts of Canadian provinces seem to make the most sense to me (think upper British Columbia or Alberta), as very few people live there, let alone trek out into the wilderness. Siberia also seems to be a potential spot. I haven’t ruled out that a Bigfoot could exist somewhere in the Lower 48, but it seems unlikely. Imagination is fun, though, so I’d totally be up for a Bigfoot expedition anywhere just to experience the thrill of the hunt.

This got me thinking, where exactly would be a great Bigfoot-themed destination? Perhaps I should start with the Bigfoot Field Researchers Organization (BRFO). The organization, started by Matt Moneymaker of Finding Bigfoot fame, conducts many organized expeditions year-round (for a fee, of course). One can also dive into the sightings database to plot a good starting point for a personal trip out into the woods.

The location in the famous Patterson-Gimlin film, shown below, would seem to be an ideal start. In fact, that area of California is known as “Bigfoot Valley”, in fact the former newspaper supporting the town of Willow Creek was called the Bigfoot Valley News which was proud of a readership it contended ran “their own country within this country (and) may or may not admit to seeing Bigfoot”. A stop in Willow Creek wouldn’t be complete without a visit to the Willow Creek-China Flat Museum, which is more notable for its Bigfoot-themed collection than anything Humboldt and Trinity County-related.

Getting to the spot of the Patterson-Gimlin film may be quite a chore, and would require diving deep into the backwoods of Northern California. Driving up and down remote California 96 would be quite a trip in and of itself, but I don’t know just how easy one could venture off into the wilderness from there. Those looking into planning a trip would do well to check out the Forest Service’s page regarding the Klamath National Forest, which seems to abut against the spot of the film from what I can see (it also looks like there is some type of road to the general location of the site, but I can’t vouch for that, nor can I vouch for the condition of such road).

The Redwoods have also been cited as a popular spot for Bigfootin’, and you’d do yourself a disservice if you were in the area and didn’t visit the Bigfoot Discovery Museum in Felton, CA. It’s one of the most widely known museums dedicated to the true believer cause.

If venturing out into the unknown is not really your thing, then maybe a visit to Bigfoot, Texas sounds easy enough. Actually, despite the name and the fact that Texas gets a lot of Bigfoot sighting reports, the town of Bigfoot gets its name from a former Texas Ranger (the lawman-variety).

The fact that this place is home to the Bigfoot Alternative High School is just fantastic, though. I mean, what a name for a school.

Now take a look at the map above, Lake Bigfoot appears to be referring to the lake that actually looks like a “big foot”! While it’s unlikely you’ll find a Bigfoot in Tasmania (you might find the Tasmanian Tiger instead), this is still a very cool geo-anomaly and certainly worth dropping a few thousand to trek off into the wilds of this Australian island 😉

By the way, there is a similarly named and sized Bigfoot Lake in Idaho (where you’d likely have a better chance at spotting Bigfoot, I suppose), but the one in Tasmania just looks more like a fabled Bigfoot footprint casting.

Now we’re talking. A government-sponsored park named after the big man in a location that makes sense to me. In fact, the official website from BC Parks says the following, that in 1968 “the park was renamed Sasquatch Park after the legendary Bigfoot, who is alleged to have roamed the area.” The park, which is about a two-hour drive east of Vancouver, seems to get a lot of attention for its name alone (a quick Google image search shows plenty of tourists snapping shots with the welcome sign). Either way, it seems like a beautiful place to visit.

In all honesty, a Bigfoot-themed trip could be just about anywhere on this vast continent. Heck, anywhere on the planet. People have seen some strange things out there and certainly many are credible and confused about what they saw. Perhaps the best Bigfoot trip is an unplanned and unexpected sighting! If you’d like to share your own stories or locations, feel free. I won’t judge!