SO WHERE IS THE NORTHERNMOST PALM TREE?

Palm trees are, let’s just say it, AWESOME! I mean, who doesn’t like seeing one? I suppose if you have a tropical habitat, maybe you would grow tired of these majestic, yet hardy, trees. But for most of us in North America, you know you’ve landed in Vacationland the moment you set your eyes on one of these.

A question that has always bugged me, though, is just how far north can you go to still take in that comforting site of a palm tree?

Now, this question comes with a ton of caveats. There isn’t just one kind of palm tree in the world – there are literally thousands of types. Some can exist as far north as Ireland and the state of Washington – though these palms are cultivated and not native to the land. According to Wikipedia, the northernmost native palm is the Chamaerops in Southern France. I’ve seen similar palms in Congaree National Park in the central part of South Carolina. The beautiful Palmettos in both Myrtle Beach and Charleston, S.C. are within a long day’s drive from most of the major Atlantic coast cities.

The Chamaerops is cool and all, but it’s hardly the type of palm associated with a beautiful sandy beach. I guess my question narrows then, where can one find the northernmost, um, one of these… 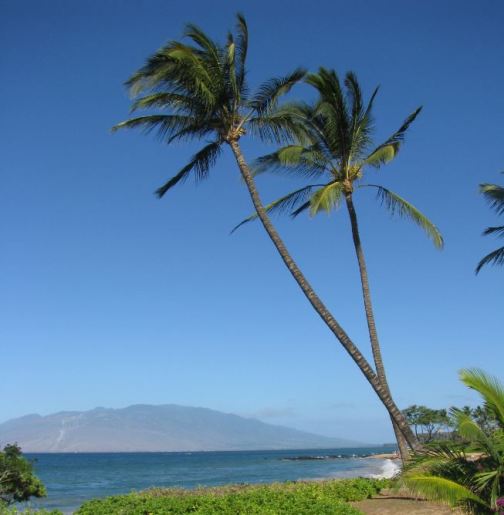 So I guess we are looking for coconut palms, then? In reality, the Florida Keys is the only habitat available in the U.S. that will grow and maintain coconut palms consistently. But native palms exist further north than that. The traditional cutoff lies on a line that stretches from Tampa to Melbourne in Southern Florida. In fact the town of Palm Bay is positioned just south of Melbourne – though it’s name comes from the prevalent sabal (Palmetto) palms. However, apparently coconut palms can crop up as far north as the Orlando area (per this blogger who noted the fruit-bearing tree in and around Sea World). Are these native or cultivated? Hard to say, but I’m sure a few weak ones will spring up from time to time.

California is known for palm trees – but coconut palms are rare. San Diego seems to have a few and one could say the city owns the title of the northernmost spot for these palms to reside. But look further north and we may have our champion…

Newport Beach, California, all of 33.37 degrees North (almost eight degrees fully north from the beginning of the Florida Keys), is apparently home to the northernmost (cultivated) coconut palm. This little winter survivor was planted in 1984 and (I presume) continues to live on to this day. Brent from American Voyages visited this tree a couple years ago and did a great writeup on this very topic (that being northernmost coconut palms). It’s a scrubby little version of the tree, but it is, alas, a coconut palm!

43 thoughts on “SO WHERE IS THE NORTHERNMOST PALM TREE?”