I didn’t expect to enjoy Fallingwater as much as I did.

Fallingwater, of course, is the name of a house in Pennsylvania. But that doesn’t begin to describe the importance of it. Nestled in the beautiful Ohiopyle State Park in the Southwestern section of the state, Fallingwater was one of Frank Lloyd Wright’s greatest works.

Wright and his associates built Fallingwater right into the rockside hugging Bear Run – a tributary of the (mouthful) Youghiogheny River. Fallingwater sits above a waterfall with its three cantilevered balconies hanging overhead. The whole thing seems precarious, and it was, until the Kaufman estate (the well-to-do Pittsburgh family that resided in the house) handed Fallingwater over to the Western Pennsylvania Conservancy. The house was not long for this world before it was re-stabilized. It continues to undergo constant maintenance work.

I can talk about Wright’s masterwork in far more detail ’til your blue in the face. I won’t rehash the same story here, but I will say that Fallingwater is worth the trip. I’ve put off the journey myself for awhile simply because seeing an old house didn’t hold much appeal for me. That, and I was probably prioritizing National Park sites (heck, I visited the region just last October – checking off another “old house” in Friendship Hill as well as the Fort Necessity National Battlefield).

Fallingwater is just straight up nuts. Wright had no regard for stability here, Fallingwater was his personal craft, his sandbox among the rocky ridges of Bear Run. He’s fortunate the thing didn’t slide right off a few years in, with family and everything. We’re fortunate that the Kaufman’s gave it up for preservation, because it is pretty damn cool – if completely unlivable. 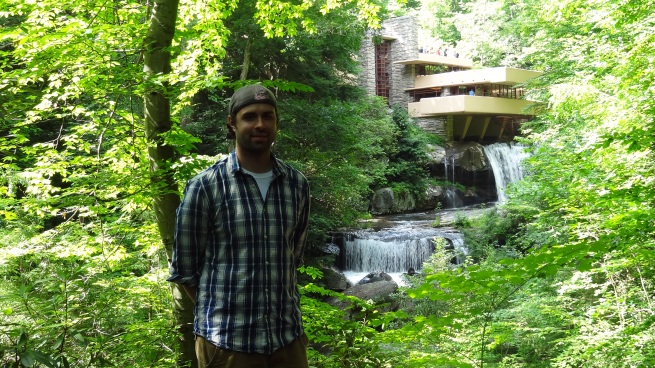 A future famous writer and his dream home…

Your standard tour last a little over an hour. It’s comprehensive – you see every room. The website seems strict about bringing large bags and cameras – asking you to keep them in your car. In practice, people were carrying purses and cameras (though you can’t use them while actually on the tour – which means no photos inside the house). The tour guide was quite thorough, and could answer every question about every detail of the house and its contents. For $22 a pop (you save a buck booking online – a whole buck!) I felt I got my money’s worth, and that’s a rare feat for many historic places at that price.