ISLAND BORDERS BETWEEN STATES AND OTHER CURIOSITIES

Oh it’s about that time for another run with Google Maps discoveries. I was actually developing a post on the most remote extreme points of states (like answering the question whether Easternmost Washington is a little tougher to get to than, say, Northernmost Virginia), when I ran into Star Island and the Isles of Shoals.

What the heck is Star Island?

Well it’s the easternmost point of New Hampshire, out in the Atlantic Ocean about six or seven miles out to sea. It’s owned by The Star Island Corporation (which seems to be a Unitarian group). This remote getaway hosts religious-themed conferences through the Unitarian Church and United Churches of Christ. These take place at various buildings on location, including the grand Oceanic Hotel.You don’t have to participate in these if you don’t want to, as day trips are available by ferry for those just looking to take in the scenery (and the easternmost part of New Hampshire).

The island actually has a land (breakwater) crossing with Cedar Island in Maine where the Shoals continue on across borders. The largest island in the Shoals is actually Appledore Island. This very southern Maine isle (as opposed to the litany of them further north) houses the Shoals Marine Laboratory.

That made me wonder…are there any other strange border islands or other similar anomalies I don’t know about? Why yes!

Rhode Island and Connecticut seem to share a little spit of this sandy barrier island that helps form the Little Narragansett Bay. This one seems rather peculiar and unnecessary although the dock on the Connecticut mainland seems to suggest possible private ownership for at least part of this island.

UPDATE – This little island is actually called Sandy Point Island and is, in fact, split by two states and can be visited by the public. It was formed in 1938 after a hurricane broke Sandy Point free from the Rhode Island peninsula. The Avalonia Land Conservancy runs this island as a nature preserve. It is the westernmost point in Rhode Island. 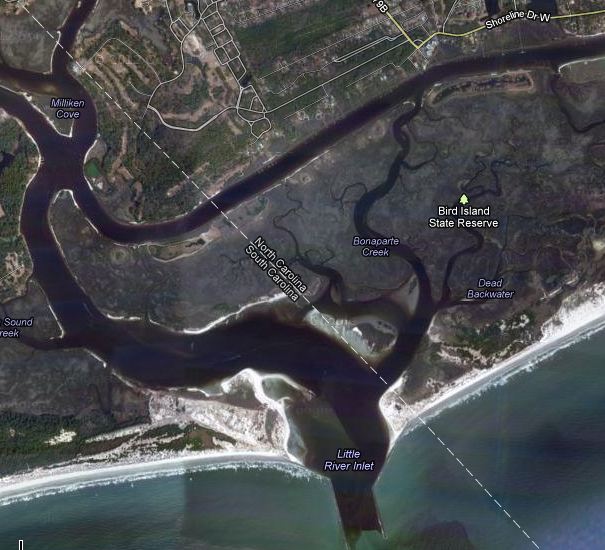 UPDATE – The big house and parking lot belong to the Ocean Harbour Golf Links – which may or may not actually exist anymore but the building was still standing as of 2010. The clubhouse, in fact, resides on South Carolina soil despite the golf club having maintained a North Carolina address. This whole plot of land is named Colkins Neck, named after someone who purchased it in the late 1700’s. Now, there are many golf courses (including another close by to this) that share state borders, but this one baffles me as it’s almost like the clubhouse is in one state and 90-95% of the golf course is in North Carolina.

This is an all but completely worthless shared border between Mississippi and Alabama. Much like the Northwest Angle sticking up north of Minnesota via Canada, this little piece of Alabaman land sticks out due South and via a long and clumsy pilgrimage through the Mississippi bayou. It’d almost be easier to just take a boat from Alabama…

UPDATE – This little notch is called South Rigolets Island, and the name is shared by both Mississippi and Alabama. Here’s wondering if more people have set foot on the moon or Alabama’s portion of South Rigolets… 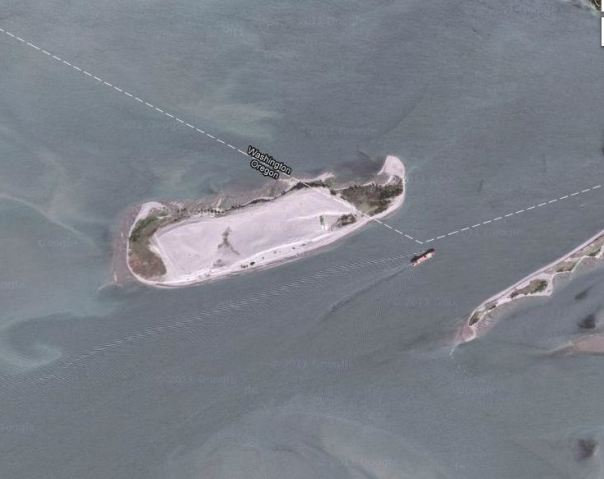 I really have no clue why this little island appears split up in Google, though the Washington side is a bit more green and speckled with trees. One wonders if the island got larger over time and the original water border became a land border on this little speck near Grays Bay.

UPDATE – I can confirm via some topo research that this island is divided by two states – but doesn’t seem to have a name. It does appear to be part of the Lewis & Clark National Wildlife Refuge, at least the part on the Oregon side. There also may be a smaller island a little bit north that gets cut in two as well. This one may require some further digging.

I’m surprised Don Wildman of the Travel Channel’s Off Limits series didn’t visit this oddity when he explored New York City. Yes, that island off the coast of Staten Island is actually split by the New York and New Jersey state line. According to Wikipedia, this little island exists in part to ward off the Army Corps of Engineers, who would rather have obliterated it to make the waters more navigable.

A trip to the Shoals as well as to that interesting building in South Carolina may be in order if I get back to either region soon. As for some of these, I’ll leave the exploring up to someone else for now…

One thought on “ISLAND BORDERS BETWEEN STATES AND OTHER CURIOSITIES”