NOT ALL REST STOPS GO THROUGH KYZYZEWSKIVILLE (JUST MINE)

So my long drive home from Knoxville, TN was far more eventful than I originally planned. I had decided a visit to South Carolina was in order for two reasons. 1) #33 BABY! 17 more to go! 2) I plan to go again sometime but didn’t expect to traverse the northern part of the state anytime soon, so why not? It’s there, I’m nearby, let’s go…

My drive took me around and through the Great Smoky Mountains which were as gorgeous as I’ve heard. It’s funny, as someone from Montana, I felt it I’d be hard-pressed to find much natural beauty out east – at least on par to what I’m used too. From New Brunswick to P.E.I. and the Shenandoas to the Smokies, I can truly say these places pack quite a visual punch as well.

Anyway, that wasn’t my point. I was heading down to S.C. on a mission. A mission that would take me to Spartanburg and the West Gate Mall, where I would scarf down some cheap Chinese fast food and pick up a couple CD’s for the road (namely the latest from Incubus, Red Hot Chili Peppers and Cobra Starship – quite an eclectic mix and nothing I usually would’ve bought, oh, six months ago). I was about to head on to Charlotte when I noticed a sign… 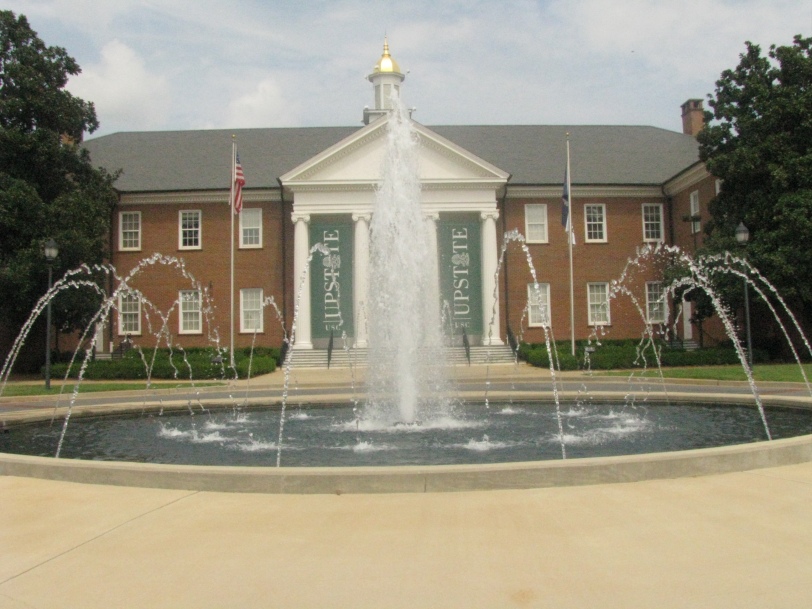 USC Upstate is full of surprises. I didn't expect a building like this...

Ahh yes, USC Upstate. In longform, University of South Carolina – Upstate, formerly known as University of South Carolina – Spartanburg. The Spartans played some good NAIA hoops for years (won the 1982 NAIA Championship in mens basketball) and somewhat recently made the transition to NCAA D-I, where they compete in the Atlantic Sun Conference. They are a minnow in the top level of college sports, but they made it nonetheless. I felt it was worth a look, heck, I needed a pit stop anyway – that large Coke from earlier was wanting out. 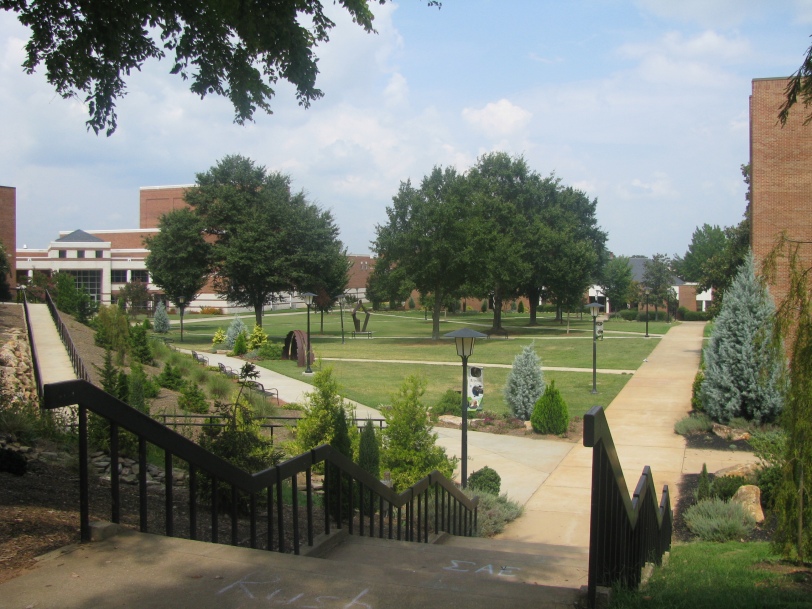 Now tell me you wouldn't go to USC Upstate. So darn charming...

So I drove out to the campus – which was equal parts quaint and quiet. A veritable ghost town – despite the loads of cars parked up near the dormitories. That campus was like good porridge, not too big and not too small. The geek that I am snapped pictures of everything sports-related, from Spartans flags to the mascot statue in front of the small sports arena. I even entered the facility and found the 1982 title banner and a huge wall plaque dedicated to that season. I decided I’d walk around a little more and look for the bookstore hoping that they were open on this Sunday for new students needing textbooks. No luck – I found the building but it was closed up. So I found the restroom and, ahem, left my mark on campus. 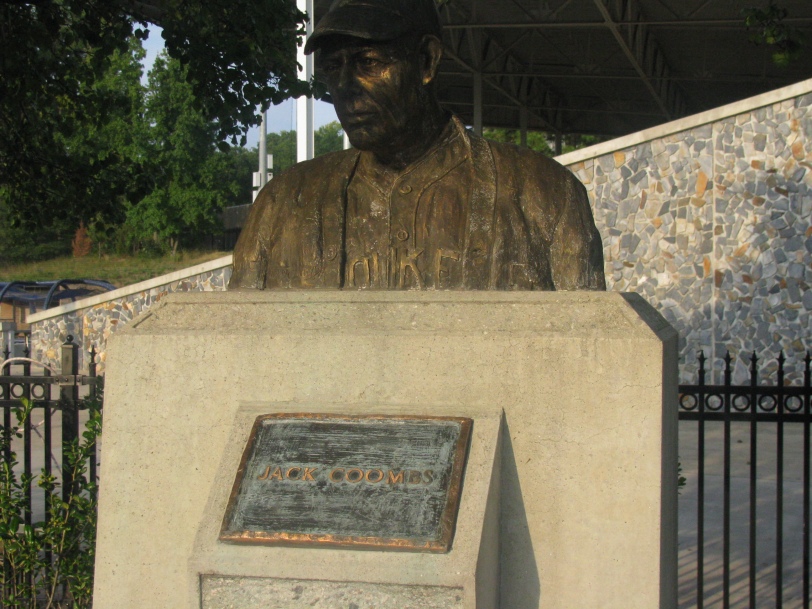 Jack Coombs was a Dookie

The drive from Spartanburg  to Climax, NC (great name, huh?) was purposeful – and we’ll get to that on a later post this week. Anyway, with 5 o’clock fast approaching I felt that it was worth it to squeeze in a visit to Duke University in Durham (as well as a trip to Durham Bulls Athletic Park) before heading back to D.C. 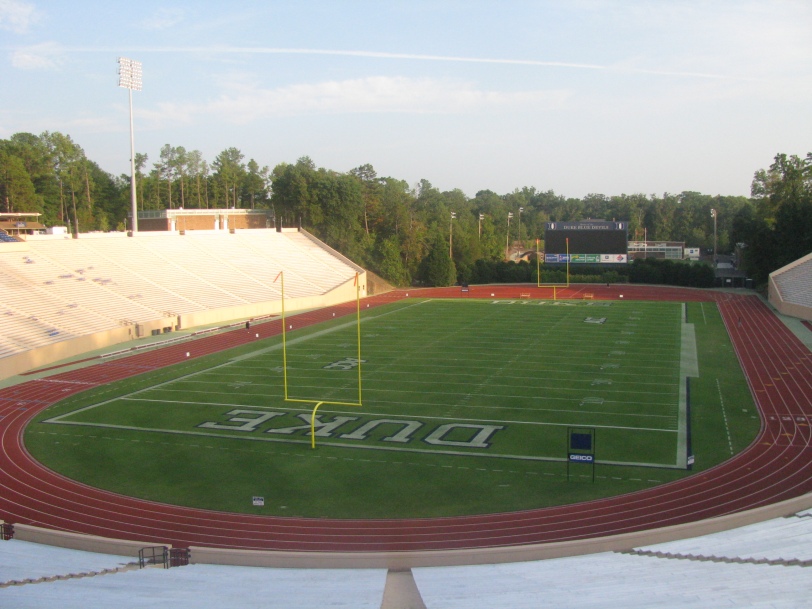 Not a bad field for the Pittsburgh Pirates of college football

By the time I hit Durham I was – you guessed it – ready to hit up the facilities again. My GPS led me to the East campus, which starts with the field hockey complex and leaves you with a bunch of residence halls. Boring. I was disappointed that I didn’t just stumble upon the famed Cameron Indoor Stadium and worried that the university was actually quite larger than I expected. That, and I was running out of time (and light). It was nearing 6:30 p.m. and I still had a sizable chunk of road home.

When has that stopped me?

I hopped back in the car, queued up Cameron Indoor and went for it. West campus was much bigger and, well, more “campus-y”. Upon arrival I was greeted by the baseball field, then the football field (which is home to the longest bowl drought in top flight football). Then there it was…the most famous college sports facility in the world. And I still needed to pee… 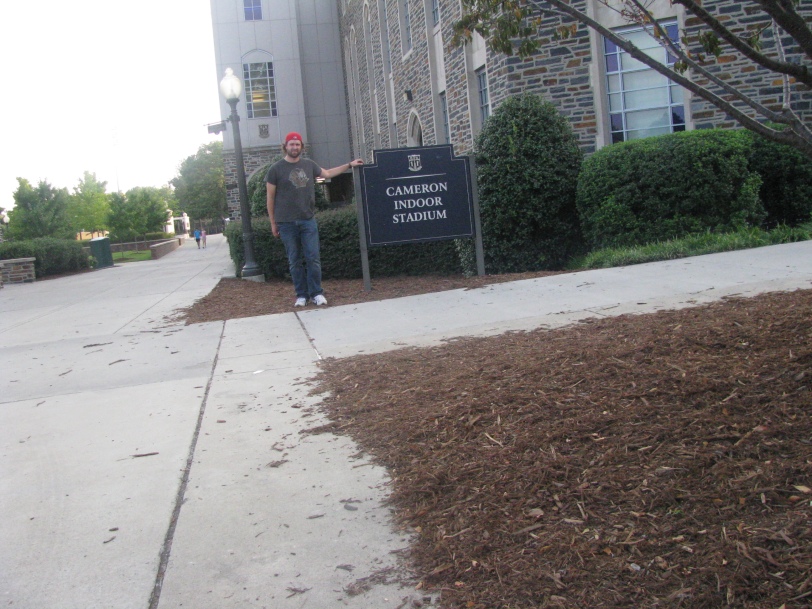 I can now say I've been to Cameron Indoor Stadium...when nothing is happening and no one is around...

No I didn’t pee in or around the campus. I managed to hold it til the Wal-mart in Hendersonville, NC. This sports fan was too distracted by what was in front of me. The first question was how was I going to get in. That got answered quick: I wasn’t.

So the second question was how I was going to get a picture. There were a smattering of students walking here and there, but no one around me at the moment. So I decided to set up my camera on 10-second delay and snap a couple of me in front of the Krzyzewskiville and Cameron Indoor signs. I managed to do ok – if not looking like a complete fool running to the sign to pose for my photos. I’m glad no one was too close by. I then took a short drive downtown to take pictures of another closed ballfield, the famed home of the Durham Bulls (of Bull Durham lore).

Front gate of the ball park

As I drove home that night I thought about the two campuses I had visited. One was Duke. Frickin’ Duke! The one of “I Hate Dook” chants you hear ’round the country come March (I’m a Terps fan, ok). The other was USC Upstate. USC Frickin’ Upstate. Who even knew South Carolina had an upstate. That’s almost like naming it Northern South Carolina University. The crazy thing is that both these schools will begin the same run to March Madness come November. Two very different schools, two very different roads to get there, but the same dream. Yes, that’s what I love about sports.