A DAY AT THE LITTLE LEAGUE WORLD SERIES 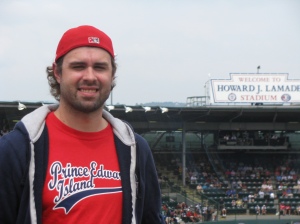 While I had promised myself a trip to Williamsport and the Little League World Series if the Billings Big Sky played on title weekend, I became far more hesitant as Hurricane Irene approached the east coast. See, Breeah had to work Sunday night so – with hotel options non-existant in and around Williamsport – we figured it would be best to drive up for Saturday’s game and drive back to D.C. Saturday night, roughly 3 hours and 45 minutes each way. With the hurricane closing in on our home base at roughly 9:30-10 p.m., it would likely mean we’d be driving through the beginnings of it as we make our way in to town. 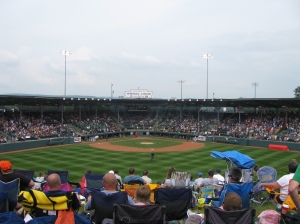 We woke up early and checked the news reports. At about 7:50 a.m., after much deliberation in my head I decided that we’d go. Yes, we could have easily spent a lazy Saturday at the apartment, watching my hometown Billings play California on ABC for the USA title. But we were close enough to see it in person, and when do you get the chance to do that…
The drive was cloudy all the way, with intermittent sprinkes thrown in, especially in the Selinsgrove, PA area (home of Jamie Moyer). We also drove right past Bucknell University, which I had no idea was located in Central Pennsylvania. Oh yeah – and a Long John Silvers, which I had no idea still existed…

The famous berm is packed full

We drove right into South Williamsport and spotted our second Goodyear blimp of the year (first time was for the U.S. Open in Bethesda earlier this summer). The Little League complex is right there off the highway, starting with the office building and Hall of Fame complexes. Parking was for sale around the area, but I decided to head around the back neighborhoods and found a nice spot for free.

Japan celebrates their title as Billings takes the field

The atmosphere around the complex is one of a county fair. Fans are lined up at multiple concession points, the gift shop is a major attraction (which, because of the long line, I didn’t patronize). The makeshift ESPN studio was situated outside the main entrance, with longtime Baseball Tonight host Karl Ravech holding the fort by his lonesome. Later – between games (we arrived during the early stages of the Japan-Mexico game) – I stood behind Ravech and waved my Billings Mustangs hat around like an idiot. If somebody saw it back home in Billings, please let me know.

We arrived to a packed Howard J. Lamade stadium and were pretty content with finding a spot on the historic berm. We managed to locate a free patch of grass along the left field foul pole. Breeah enjoyed a slush while I got a messy (but good) burger from the Food Network stand. We relaxed on the hill and enjoyed the rest of the International title game, which Japan was handling fairly easily.

Dancing before the game with the mascot

The funny thing about the crowd atmosphere at these games is the general indifference of the fans. It seemed a few more of the 20,000+ were pulling for Mexico (and then for Billings in the second game), but you sensed that fewer than a 100 or so really had any stake in the game. It wasn’t a raucous crowd by any means, despite being the largest crowd I’ve ever been a part of in a non-MLB game. People were generally quiet and cheered politely when either team did something beneficial. When Japan finally finished off Mexico, people stood and clapped in appreciation of a good game by both teams. There was no wild yelling, shouts of “we did it!” or “yeah, WOOO”, or whatever…which was fine, it’s Little League Baseball after all, but it was kind of odd to see. It could have just been an exhibition game and you wouldn’t know it. 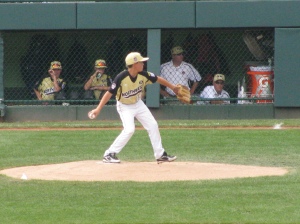 I spotted fewer people from Montana than I hoped. On the drive up I had expected to see a Montana license plate or two, but managed to only see one from California. Of course, the crew in Northwest jerseys (who couldn’t take their normal spots in the stadium until the end of the first game) and a few local newscasters were a given. I noticed one guy walking around in a Billings Mustangs jersey and then I ran into congressman Denny Rehberg, who I exchanged words with for a good 30 seconds. He had and a bunch of others had hired a bus up to the game.

Prior to the start of the game, Little League memorialized two former little leaguers that had perished in tragedy the past year. One, a soldier in Afghanistan who took a grenade blast to save his fellow soldiers, and another who perished in the Tuscon, Ariz. shootings. The respectful applause from the standing audience was the loudest of the day.

Now – onto the Montana-California game, which, to my friends back home in Billings, didn’t exactly go as hoped. The boys lost 11-2, but hung around through the first three or four innings. It wasn’t the cinderella ending to one of the best stories of the tournament in years, but it was great to follow the run the past few weeks and I enjoyed being part of it in person. Yes, if there wasn’t double elimination, our Montana boys would have already been in the World Championship game. It, well, sucks that they beat California once and had to play them again. But they can be very proud for accomplishing what no one ever expected them to do. They put Montana baseball on the map, at least for the moment, and made a lot of people back home proud. I’ll say this – walking around with my Mustangs hat on in small town Pennsylvania, miles and miles away from Montana – I felt a lot of pride for my home city.

We left a tad early, as the sixth inning began, in hopes of beating Irene on the way back. The last 45 minutes of the drive was a beast, but we made it back safely. The wind and rain picked up later that night and throughout the early morning hours, cutting our power at 1:45 a.m. As I type now, nearly eight hours later we are still without power and I’m sucking the life out of my computer battery. It’s nice to be at home and safely sheltered, but for a day my heart was back home in Billings.

Check out more images in the gallery below…

The famous berm is packed full

Japan celebrates their title as Billings takes the field

Dancing before the game with the mascot

A long way back…