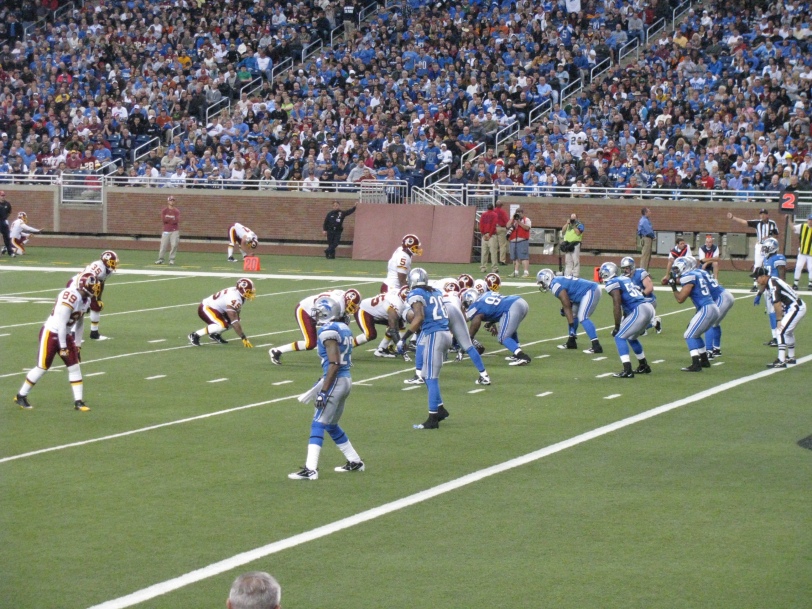 It’s no secret I’m a lifelong Redskins fanatic. I’ve been singing the lyrics to “Hail to the Redskins” since I was in the high chair watching the Redskins win Super Bowl XVII over the Miami Dolphins as an 8-month old (okay, the story is true, sans the singing part).

So last week’s big opening win against the rival New York Giants inspired me to grab a ticket to this week’s matchup with the Arizona Cardinals. Surprisingly, I got a nice seat for not as much bank as it’s taken in the past to see the Skins play.  That, and I discovered I can take the metro to the game, so I don’t have to deal with the daunting task of driving there. Now that I have a blog to spout off about such experiences, I figured it was worth diving into my history of attendance at Redskins games. I was surprised I came up with nine games  – which if I recalled correctly, is all nine of them. So here goes…

Yes, my first Redskins game was, to this date, their last Super Bowl appearance and win. What a way to start, huh? Dad had entered us in the NFL ticket lottery for the right to buy tickets at face value. My mom’s entry won and I remember going crazy upon seeing the notice in the mail. My mom, being the generous non-football fan she is, was fine with my dad and I going. The two tickets arrived just in time for Christmas – Dec. 24 to be exact. For some reason I remember thinking there was no way the Redskins weren’t going to get to the big game, they had been blowing out most of the league that year. They rolled through the playoffs en route to a date in Minneapolis with the Bills.

I remember attending the very first NFL Experience (which spurred similar yearly fan events in other pro leagues). At one station I tried to run as fast as Darrell Green (the fastest man in football at the time), to no avail. I also remember MC Hammer (or a lookalike) regaling an audience with “2 Legit 2 Quit”. I imagine the event has since upgraded to using American Idol runners-up…

The game wouldn’t go down as one of the most memorable Super Bowls, but my team won, so what did I care. I remember most every highlight, flashbulbs popping on every play, Gloria Estefan and Harry Connick, Jr., sitting by a guy from Hardin, MT attending his first football game and the Redskins storming the field after the win (followed by fireworks on the walk back). There’s a standing offer that when (not if) the Redskins go back to the Super Bowl, dad and I will be going again. 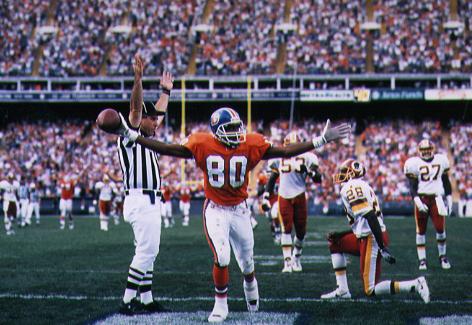 My first Redskins loss was a very tough one to swallow. Dad and I drove up to Denver the day before with a couple of friends (Broncos fans). The next day I’d witness a see-saw battle between John Elway and…Gus Frerotte. I was on the Gus Bus, of course.

The Skins fell behind by 17 points early on, but managed to pull back into it. With the score tied 31-31 with 6 seconds left and the ball on the Redskins, John Elway flung a desperation heave into the corner of the endzone. A nobody (at the time) named Rod Smith caught the ball over Darrell Green for the winning touchdown with no time left.

I remember standing by the exits as Dad decided we were going to leave if there was OT (considering we had an 8-hour drive back). I think that might have jinxed it. For Elway it was the first time he’d won a game on a final play touchdown and for Smith, it was the first catch of a solid career. For me, it was denial, denial, denial. I even forgot Smith caught the ball years later, mistakenly thinking it was Ed McCaffrey. Billings Gazette staffer Greg Rachac burned me on a bet based on my mis-remembrance of the play.

My first time witnessing a truly sloppy Redskins performance – something that I’d get used to, at least while watching them on television.

As I recall the Redskins didn’t play all that horribly and remained in the contest for most of it, but there was little inspired play here. I vividly recall an awful post-reception fumble by fullback Mark Logan being the ultimate undoing.

My first night game – this one took place on Sunday night. It was also my first and only football game at RFK before the Redskins moved. 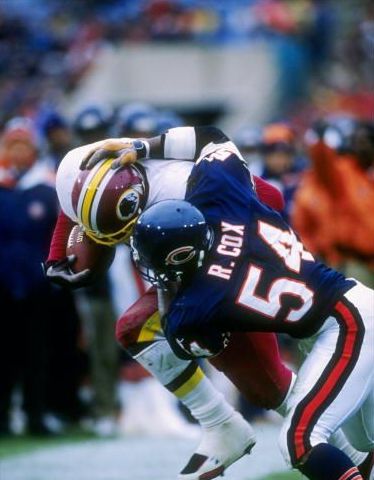 The trip to Soldier Field was memorable, if only because it’s Soldier Field. I had actually been to the stadium in 1994 for a World Cup game between Bulgaria and Greece, which was, perhaps, more memorable than this contest despite a 4-0 outcome for Bulgaria.

That said, it was windy and chilly – perfect Chicago football weather. A group of friendly Bears fans were feeding us homemade cookies throughout the rout. As I recall, it was the only game in history (at least at the time) to end in a 31-8 score. Go figure that that’s the one stat I remember.

I finally ended an eight year drought with my first game at Fedex Field (formerly the JKC – Jack Kent Cook Stadium, then just Redskins Park). This one was a fun one, with D.C. all abuzz over the playoffs and needing a big win against the Giants.

The Skins did just that, and Patrick Ramsey had what might have been his last important game for Washington. Ramsey came in for an injured Mark Brunell and played very well and Santana Moss had a career game, netting 160 yards and three scores. It was a fun time to be a Redskins fan again as the boys would win the following week and clinch another playoff berth under Joe Gibbs.

Brutal weather and brutal defense (in a good way) sent the Redskins to the playoffs.

This one was memorable for many reasons…

1)Dad and I nearly froze to death in the cold rain.

2)The tickets cost bookoo bucks, but we still left after two quarters.

3)The Redskins clinched another playoff berth with a big blowout over the hated Cowpokes.

I couldn’t have been more excited to see my first game in the storied Redskins-Cowboys rivalry. I couldn’t have been more bummed that the clouds unleashed freezing rain upon us that day. Add in the fact that the crowd stood up the entire game (at least the lower level endzone seats where we were), effectively taking out any chance of warmth from huddling in our seats. So, yeah, maybe we could’ve dressed better. I figured a sweatshirt and winter jacket would do – but the rain soaked right through. By halftime I was a chivering, shattering mess who could barely hold his hot cocoa. Dad was even worse off…so ultimately we decided to head back into the warm car and take off, trusting the game was already won.

A Redskins win was good medicine in Seattle

A quickly planned trip to Seattle around a cheap airline ticket accounted for this one – our first Redskins road game in over ten years. We arrived the day before and met up with a former Gazette and Billings Mustangs staffer, Seth Moir, for dinner. We feasted on all sorts of shellfish down by the famous Seattle pier.

On Sunday, the shellfish feasted on me.

I awoke to some serious cramps and nausea. I’ve always been afraid of throwing up, so I held everything in with all my strength. I managed to get my hands on some antacid tabs. The rest of the day proved to be brutal.

I took these flu-like symptoms with me to Qwest Field and while the weather wasn’t warm, it felt 20 degrees colder to me as I shook with fury in my seat – running to the bathroom at least 3-4 times to, well, No. 2…I guess that’s what it was…

Somehow I managed to last the entirety of the game, taking photos and watching the Redskins hang on and run their fortunes to 7-4 on the season (before, of course, losing the next three and eliminating themselves just as quickly).

That night I began to feel myself again, and by the time we arrived at the Seattle airport for the flight back to Billings, I was good to go.

I haven’t had shellfish since… 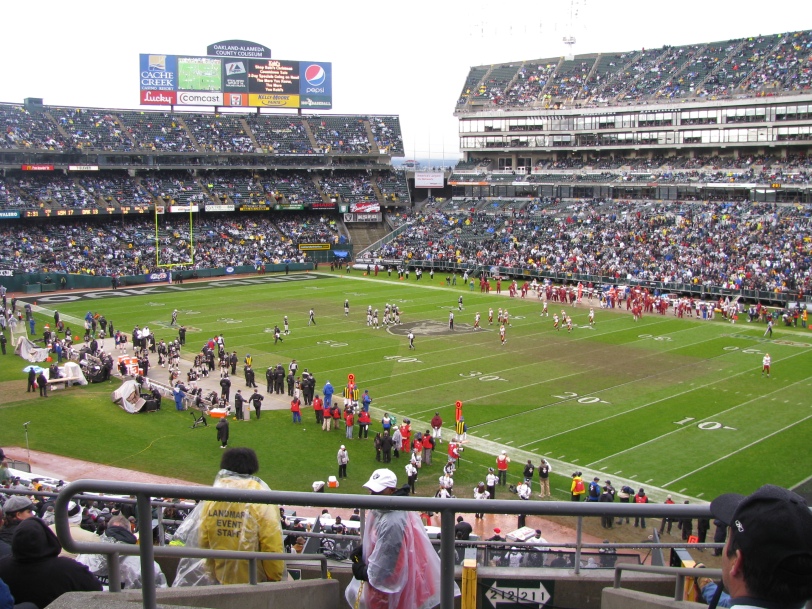 It was a drizzly day in the Black Hole

This one was interesting for many, many different reasons than any of the other Redskins games I’ve attended.

Firstly, who takes a trip to see two teams with a combined seven wins battle it out this late in the season. We do, I guess.

Our short trip to San Francisco was highlighted by visits to Alcatraz, the Coit Tower and riding the famous street cars. The other highlight was visiting the black hole in Oakland for this terror of a football game.

The black hole turned out in full force, four wins or not and, in fact, the stadium was more packed than I anticipated. It was an odd feeling. These were rough-around-the-edge fans, serious about their football and more than had it with the Al Davis-led shenanigans. I wore a black coat to fit in (see: not a diehard, Redskins vs. Cowboys). My dad somehow escaped with his life despite wearing a Redskins toque.

Despite the Redskins coming in with a paltry three wins, they looked like champs against Jamarcus Russell and the Rayyydahhs. The game will forever be remember for Fred Davis making some sort of mystery gesture while celebrating a touchdown. I  happened to take a video of the play here and it was talked about on the Washington Post’s DC Sports Bog the next day.

There is Rex Grossman in the final minute of a loss, post-McNabb era and post-lost fumble

Otherwise known as the day Donovan McNabb’s career, unofficially, came to an end.

With the Redskins sputtering late in the game, coach Mike Shanahan pulled their newest acquisition, McNabb, for the much vilified Rex Grossman. Grossman was apparently supposed to just pop-in and lead the Skins on a game winning drive. Instead, he fumbled it away, returned by the Lions for a game-clinching score.

Two Brandon Banks return TDs (albeit one called back due to penalty) and relatively solid play from the Skins the entire game was undone in the final moments of a bizarre back-and-forth affair. As it stands, it was the beginning of the end for the Redskins that season and certainly marked the end of their relationship with McNabb.

The story continues on Sunday…

9/15/2014 UPDATE – Since this writing (the Skins topped the Cardinals, by the way), I’ve attended two additional games. I sat in the “Dream Seats” section for a 12/4/2011 loss against the Jets (paying “only” $100 per ticket, a bargain for that section and a one-time thing for me). I also attended the 9/14/2014 win over the Jacksonville Jaguars, my first time seeing Robert Griffin III play (and get injured, again) as well as the dismal Jaguars. The Redskins are 8-4 when I’m in attendance.