THE OUTER BANKS: A PLACE OF FIRSTS

It had been over three years since I first visited the Outer Banks on a day trip from Washington, D.C. (yes, a day trip. My boots were on the ground just long enough for an all-you-can-eat seafood buffet and a walk on the beach). It was high time (or as they may say in isolated Ocracoke, hoy toym) I got back to at least take in all the historical influence the place has had on our country.

Seriously, though, the Outer Banks are like D.C. on the beach – there is so much random and cool history on that glorified sandbar. Like… 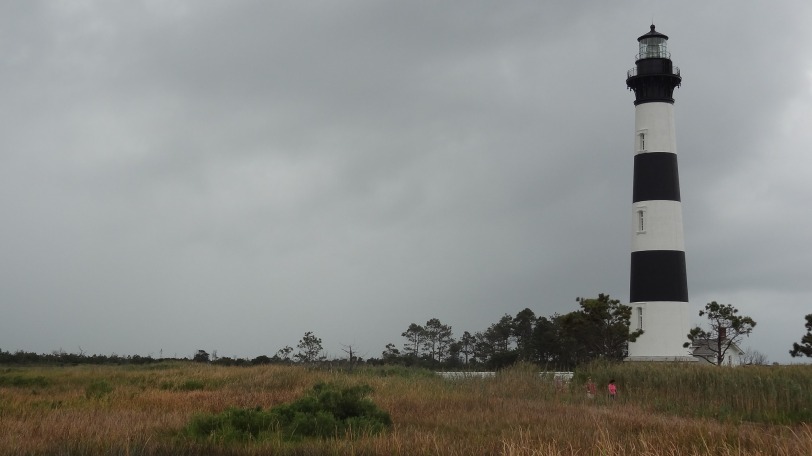 The Bodie Island Lighthouse, the first place to stop for most tourists at the Cape Hatteras National Seashore

Reginald Fessenden may not be a household name, but this pioneer of radio did much of his breakthrough work on the Outer Banks – sending some of the earliest audio transmissions from Roanoke Island to Cape Hatteras in 1901 (his very first documented transmission came the year before, on Maryland’s Cobb Island).

Notice the difference in stripes from the Cape Hatteras light (pictured here) and the Bodie Light.

Of course, Cape Hatteras is most notable today for its famous lighthouse – specifically the Cape Hatteras Light (which is one of three lighthouses on the National Seashore today). The lighthouse is the tallest of any brick-built lighthouses in North America. An $8 climb to the top would normally be in my budget, but on a gloomy, rainy and windy day – I hung around the gift shop and later admired the view of the lighthouse from the keeper’s cottage. 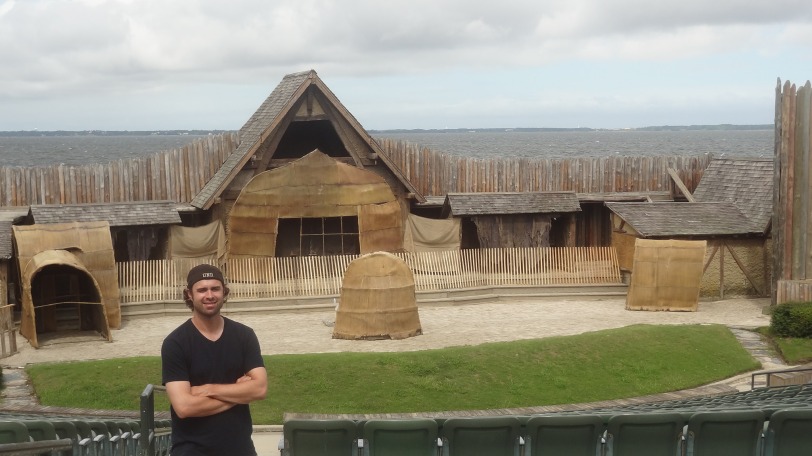 The Waterside Theater, home of The Lost Colony production

Roanoke Island, plopped in between the mainland and the banks, is the first recorded attempt at an English settlement in all of North America. Under the guidance of Sir Walter Raleigh and Governor John White, the English settled on the northern part of the island (protected today by the Fort Raleigh National Historic Site). It was here that we also had the first recorded English birth on American soil, that of Virginia Dare (the surname which, not coincidentally, is the name of the county) in 1587. 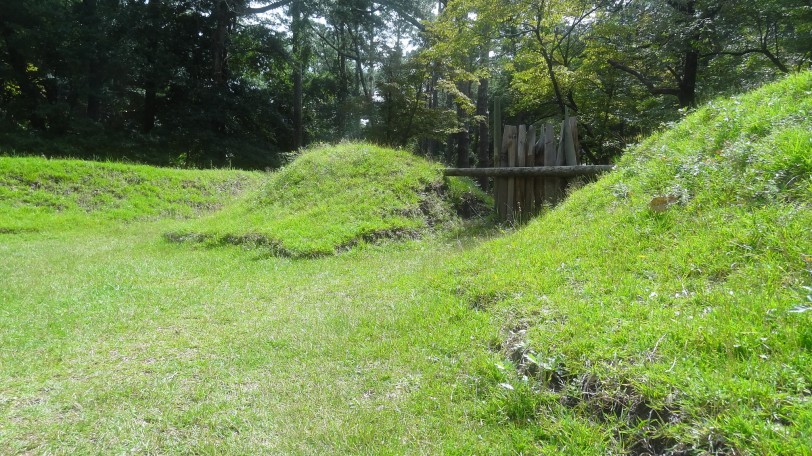 The earthworks at the former Roanoke Colony

So, how’d they manage, you ask? Well, we don’t know. In 1587, soon after Dare’s birth and two years after the establishment of the Roanoke Colony, Smith took off back for England in search of more support for the fledgling settlement. Upon his return, in 1590, he found the place abandoned – with no sign of life or struggle, the only clue being the etched carvings of CROATOAN and CRO in a fence and tree, respectively. Smith took this to mean that the villagers left for Croatoan Island (now Hatteras Island) but, due to dangerous sailing conditions, wasn’t able to make the trip south across the bay. Personally, I found this rather odd that they’d give up so easily being that close to Croatoan and having just sailed over the entire Atlantic – but there must have been very good reason for it.

Totally not related to Fort Raleigh, this little piece of “lovebird” history is the Inn at Rodanthe – the exact one used in the Nicholas Sparks film, Nights in Rodanthe.

There isn’t much left of the site today, sans some reconstructed earth works. It does feel very much like a spot of early settlement, and it’s easy to let your imagination run wild. If you really want to get into it, take in the Lost Colony play, a summer-only production that has been running on-site at the Waterside Theater since 1936.

I can now say that I stood at the exact spot of the first powered-airplane flight!

Of course, a trip to the Outer Banks wouldn’t be complete without a trip to the same strip of land that the Wright Brothers – Wilbur and Orville – tested the very first successful powered flights and paved the way for people like you and me to, well, spend tons of money on flights and get whisked away to, say Easter Island, without having to be Thor Heyerdahl.

The visitors center at the Wright Brothers National Memorial includes a mock-up of the first Wright Flyer (before you quibble that it’s not the real thing – this is a mock-up that cost over a million bucks, youch). Of course I’ve seen the real deal at the Smithsonian here in D.C, but it was interesting to see the ranger demonstrate the movement of the actual parts that controlled the plane (which, obviously, looks a lot different than today’s planes and more closely mimics a glider). 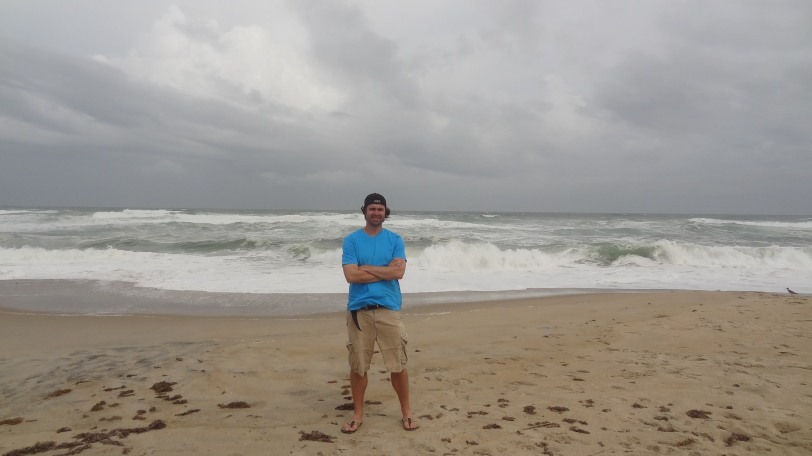 The sea was rough for the entirety of the weekend – I could see why the Wright Brothers enjoyed the windy conditions here!

The very first flight (and successive ones) are memorialized on the airfield as are the brothers themselves, with one of the grander and more picturesque monuments I’ve seen in my travels around the status. The monument itself resembles an airline fin of sorts, with lines etched in to resemble feathers or the sun (as in the tale of Icarus – which is illustrated on one of the doors of the monument).

While the Wright Brothers tested their flights in Kill Devil Hills, they are most associated with nearby Kitty Hawk because, at that point, that was where most of the population on the Banks was.

Believe it or not, Breeah and I managed to squeeze all three of these stops into another jam-packed Friday night-to-Sunday night “Weekend Roady” road trip. The always go by fast – but it always beats sitting around the house! I even managed a smattering of counties to push my tally that much closer to the magic 1,000 and stopped by Rodanthe, the easternmost place in the state and the site of a Nicholas Sparks tearjerker. All in all, we made nice work of Banks in just two days!